Unnamed sources told NBC News, NPR and CNN that Breyer has decided to step down, giving President Joe Biden the opportunity to nominate his replacement.

Breyer does not plan to leave until a new nominee is confirmed to the nine-member court, CNN reported.

Biden declined to comment on Breyer's plans, saying the justice has yet to make a statement. Biden said he'd have "more to say later."

During his 2020 campaign, Biden pledged to select a Black woman to be his first nominee to the Supreme Court should there be an opening. White House press secretary Jen Psaki on Wednesday told reporters Biden plans to stick to that promise.

"The president has stated and reiterated his commitment to nominating a Black woman to the Supreme Court and certainly stands by that," she said during a press briefing. "For today, again, I'm just not going to be able to say anything about any specifics, until, of course, Justice Breyer makes any announcement, should he decide to make an announcement."

"With this Supreme Court vacancy, President Biden has the opportunity to nominate someone who will bring diversity, experience, and an evenhanded approach to the administration of justice," he said.

"I thank Justice Breyer for his decades serving the court and the nation. He has been a trusted voice on the bench with a first-rate legal mind."

Breyer is 83, the court's eldest member and one of three remaining liberal justices. He was appointed by former President Bill Clinton and joined the court in 1994.

Prior to that he served on the 1st Circuit U.S. Court of Appeals for from 1980 to 1994, the last four years of which he was chief judge. He was nominated to the appellate court by former President Jimmy Carter.

Prior to his judicial career, Breyer served as a law clerk to U.S. Supreme Court Associate Justice Arthur Goldberg and as a special assistant to the attorney general in the U.S. Department of Justice's Antitrust Division.

He taught law at Harvard Law School from 1967 until 1980, when he was nominated to the court of appeals.

During his career he also worked on the Warren Commission and the Watergate Special Prosecution Force.

Supreme Court Justice Stephen Breyer to retire: a look back 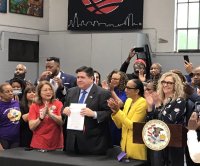