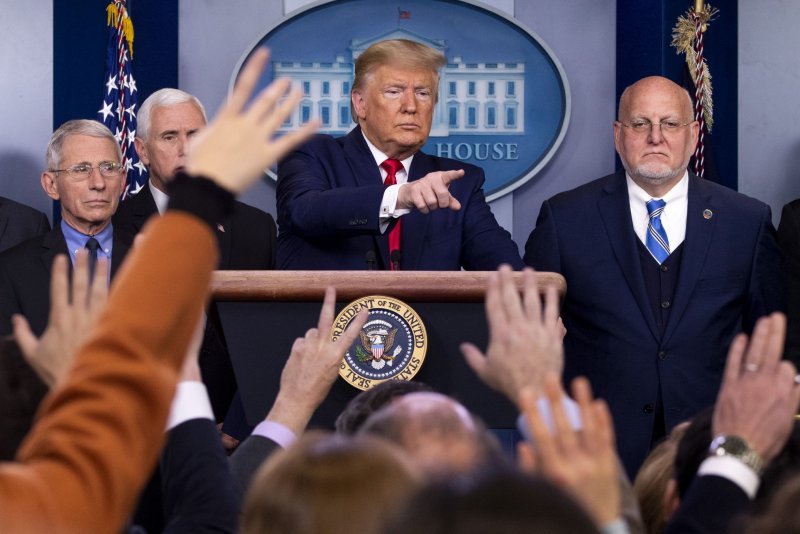 Then-President Donald Trump delivers a briefing on the COVID-19 outbreak at the White House in Washington, D.C., on February 29, 2020. File Photo by Kevin Dietsch/UPI | License Photo

Dec. 17 (UPI) -- A congressional report released on Friday says that officials in former President Donald Trump's administration made "deliberate" efforts to undermine the federal response to COVID-19 after it arrived in early 2020, mainly so that the crisis wouldn't harm Trump politically.

The 46-page report was released by the Democratic-led House oversight committee's select subcommittee on the coronavirus.

The panel said Trump's administration performed various efforts to influence or downplay the coronavirus outbreak. This included blocking health experts from speaking publicly about the dangers of the virus, playing down testing guidance, attempting to interfere with public health guidelines and other "staggering" acts of political interference.

"The select subcommittee has continued to uncover evidence of the Trump administration's deliberate efforts to undermine the nation's coronavirus response for political purposes," the panel wrote in the report.

Dr. Jay Butler, deputy director for infectious diseases at the Centers for Disease Control and Prevention, told the committee that he was directed by Trump's White House to give "softened" guidance to religious and faith communities.

Butler says he gave guidance, for example, about masks and church services that was not in line with critical health recommendations.

"I was doing a lot of soul searching about whether or not I should have agreed to even make the change," Butler states in the report.

"Clearly, it was a directive, but that was a real struggle as I felt like what had been done was not good public health practice."

Butler added that he was "very troubled" to understand that Americans could die or become very sick because of the interference from administration officials.

Dr. Deborah Birx, the White House Coronavirus Response Coordinator, was so upset about one meeting with a group of "fringe doctors" that she told her colleagues she would not attend, according to the report.

Specifically, Birx was infuriated over a proposal to let the virus spread unchecked throughout the United States to achieve herd immunity, which she said the doctors supported. The proposal was leaked to news media and universally condemned in the medical community.

Friday's report said the radical herd immunity strategy would have put "millions of lives at risk."

"These are people who believe that all the curves are predetermined and mitigation is irrelevant -- they are a fringe group without grounding in epidemics, public health or on the ground common sense experience," Birx wrote in an email, according to the House report.

The oversight committee investigated the efforts and actions of Trump administration officials for more than a year to compile the report, which said that Trump's efforts to fight the pandemic effectively disappeared after he lost the presidential election to Joe Biden.

"The select subcommittee also uncovered evidence showing that Trump White House officials neglected the pandemic response to focus on the 2020 presidential election and promote the Big Lie that the election results were fraudulent," the report states.

U.S. News // 2 hours ago
Ian rumbles toward Florida, entire state braces for storm
Sept. 27 (UPI) -- Evacuations have stepped up along the Florida Gulf Coast and Tampa Bay as Hurricane Ian intensifies to a Category 3 hurricane ahead of its expected landing in the Sunshine State.

U.S. News // 2 hours ago
U.S. government funding proposal may be a non-starter
Sept. 27 (UPI) -- Energy proposals included in a continuing funding resolution by U.S. Sen. Joe Manchin, a Democrat representing West Virginia, could kill the progress of a measure meant to keep the federal government functioning.

U.S. News // 4 hours ago
PG&E equipment seized in California wildfire probe
Sept. 27 (UPI) -- The U.S. Forest Service is conducting a criminal investigation into the Mosquito wildfire, which scorched tens of thousand of acres of California land.

U.S. News // 5 hours ago
Justice Department updates list of documents seized at Mar-a-Lago
Sept. 27 (UPI) -- As part of the special master review of the Mar-a-Lago search, the Justice Department submitted a slightly revised inventory of the materials seized, along with a declaration supporting the accuracy of the new list.