By James Pollard, The Texas Tribune 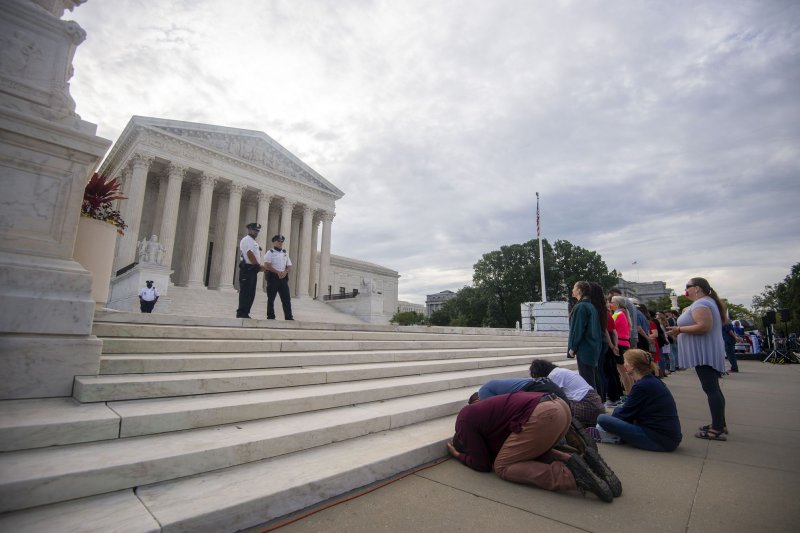 Anti-abortion activists pray outside the U.S. Supreme Court on the first day of its new term in Washington, D.C., on October 4. File Photo by Bonnie Cash/UPI | License Photo

Oct. 18 (UPI) -- The U.S. Supreme Court is considering whether to take up abortion providers' challenge to Texas' near-total abortion ban sooner than the high court usually would hear arguments.

While the clinics' lawsuit has not been heard by a federal appellate court, the Supreme Court agreed late Monday to expedite the request from several clinics and providers that the high court instead consider the case. Texas must respond by noon Thursday.

The move came just hours after the Biden administration, in a separate challenge to Texas' Senate Bill 8, asked the high court to halt the near-total abortion ban while the Justice Department's legal challenge to the new restrictions goes through the courts.

In its request filed Monday, the Justice Department argued that allowing the law to stand would "perpetuate the ongoing irreparable injury to the thousands of Texas women who are being denied their constitutional rights," it added. The Supreme Court previously declined to block the law from taking effect in the providers' lawsuit, though it did not weigh in on SB 8's constitutionality.

The Justice Department's request comes after a series of federal court decisions flip-flopped on whether the law should remain in effect as its constitutionality is being challenged.

Last Thursday, a panel of federal appellate judges ordered the law would remain in place. That decision came after a U.S. district court blocked the law for just two days until the 5th U.S. Circuit Court of Appeals -- perhaps the most conservative appeals court in the nation -- froze the order.

Texas, the Justice Department argued in its filing, crafted an "unprecedented" structure to thwart the courts. SB 8, which bans abortions as early as six weeks into a pregnancy, before many people know they are pregnant, has made abortion "effectively unavailable" after that time period, according to the Justice Department.

"Texas has, in short, successfully nullified this Court's decisions within its borders," the Justice Department wrote.

The law continues to force Whole Woman's Health, which runs four abortion clinics in Texas and six more in other states, to turn away "nearly all patients," CEO Amy Hagstrom Miller said in a statement.

"The emotional toll for our staff and providers is matched only by the anguish our patients face when they are denied abortion care," Hagstrom Miller said. "This injustice must stop and we hope the Supreme Court will do what's right."

Thousands participating in the annual Women's March walk up Constitution Avenue toward the U.S. Supreme Court, past the U.S. Capitol, to show support for abortion and reproductive rights in Washington, D.C., on Saturday. Photo by Bonnie Cash/UPI | License Photo

U.S. News // 12 hours ago
Multiple storms to keep flood risk high in Pacific Northwest
After months of heat waves and drought, weather in the Pacific Northwest has flipped completely to flooding rain and gusty storms.

U.S. News // 18 hours ago
Stocks fall to new lows Friday on news of emerging COVID-19 variant
Nov. 26 (UPI) -- News of a new and more dangerous strain of the coronavirus sent the stock market reeling Friday, where the Dow Jones, S&P 500 and Nasdaq Composite all posted the kind of losses they have not seen in months.