Oct. 15 (UPI) -- The Texas Supreme Court has blocked the San Antonio Independent School District's COVID-19 vaccine mandate hours before it was to go into effect on Friday.

The court made its ruling Thursday, saying it barred the school district from enforcing its mandate, which required teachers and staff from Friday to be vaccinated against the pandemic in violation of Republican Gov. Greg Abbott's late August executive order prohibiting such measures.

The judges in the ruling said they "express no view" on the merits of the law but grant the state's request to block it from going into effect as it is litigated.

"We have not yet had the opportunity to consider the merits of these challenges," the court said. "Our role has been to issue orders preserving the status quo."

The district had argued that since it issued its mandate Aug. 16, nine days before Abbott would issue his executive order, that its mandate was the status quo.

However, the court rejected its argument, stating the governor had asserted his authority to control vaccine mandates at the state level in April with an executive order prohibiting COVID-19 vaccine mandates authorized for emergency use by the Food and Drug Administration.

"No local entity is about state law," he said in a statement. "This decision should serve as a reminder to all Texas school districts that they should be using their limited funds on educating children and equipping teachers, not defending unlawful vaccine mandates."

The move comes days after Abbott issued a sweeping executive order prohibiting any entity such as private businesses from mandating vaccines in response to President Joe Biden last month who ordered vaccine mandates for federal employees and businesses with a workforce of 100 employees or more.

RELATED Senate to vote on Freedom to Vote Act next week, Schumer says 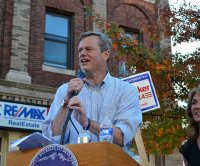