The committee said Meadows reportedly communicated with officials at the state level and in the Department of Justice in efforts to overturn the results of the 2020 election and communicated with organizers of the rally that proceeded the riots. File Pool Photo by Shawn Thew/UPI | License Photo

Dan Scavino,  former White House deputy chief of staff for communications, was also subpoenaed as he reportedly met with Trump the day before the insurrection as part of a discussion to convince members of Congress not to certify President Joe Biden's election win. File Photo by Kevin Dietsch/UPI | License Photo

The former Trump aides are ordered to appear for depositions before the committee in October. File Pool Photo by Shawn Thew/UPI | License Photo

"The committee is investigating the facts, circumstances and causes of the Jan. 6 attack and issues relating to the peaceful transfer of power, to identify and evaluate lessons learned and to recommend corrective laws, policies, procedures rules or regulations," said the committee's chairman, Rep. Bennie Thompson, D-Miss.

The committee also noted that Patel was serving as chief of staff to Acting Secretary of Defense Christopher Miller at the time of the insurrection and was involved in conversations among Pentagon officials regarding security at the Capitol and also told a reporter he was talking to Meadows "nonstop that day."

Reports also state that Scavino was with Trump the day before the insurrection as part of a discussion to convince members of Congress not to certify President Joe Biden's election win, the committee said. Records also show he tweeted messages from the White House on the day of the riots.

Bannon was also reportedly present at a Jan. 5 gathering to convince lawmakers to block the certification where he was quoted as saying "[a]ll hell is going to break loose tomorrow." Reports also state that he spoke with Trump on Dec. 30 and urged him to focus on Jan. 6.

The subpoenas instruct Patel and Bannon to appear for depositions before the committee on Oct. 14, while Meadows and Scavino are ordered to appear on Oct. 15. 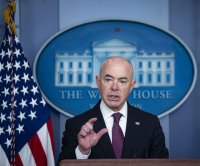