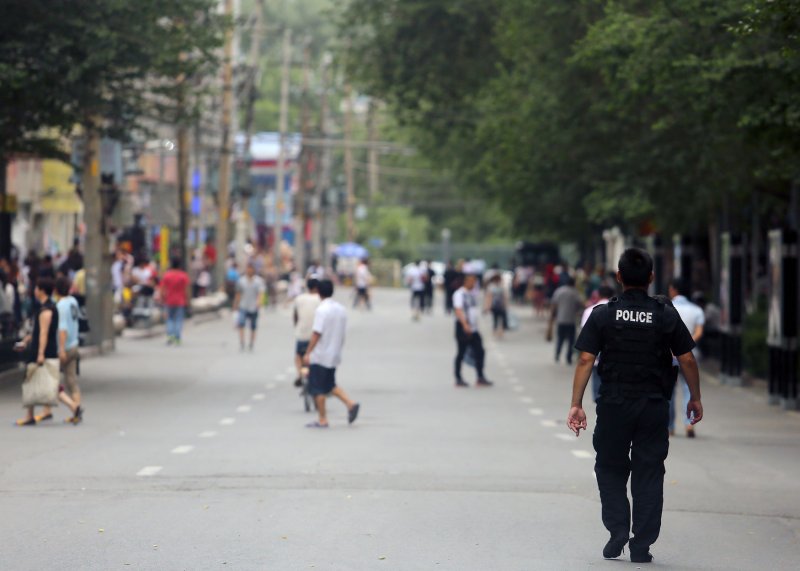 The U.S. State Department on Monday released a report reiterating its accusations that China is committing genocide against its Uighur Muslim citizens in northwestern China. File photo by Stephen Shaver/UPI | License Photo

July 13 (UPI) -- The Biden Administration renewed it accusations of genocide against China over its treatment of its Uighur minority muslim population in a new report that warned of several countries where crimes against humanity were being committed.

The State Department on Monday named China, Eritrea, Myanmar, Syria and South Sudan in its annual report to Congress on countries where there is risk of atrocities being committed.

The report also identified the Islamic State as posing such a threat in both Iraq and Syria.

"This year, for the first time, the report provides direct, detailed accounts of atrocities taking place in specific countries, including Burma, Ethiopia, China and Syria," Secretary of State Antony Blinken said during a press briefing Monday in unveiling the report, while referring to Myanmar by its old name. "These places represent some of the toughest foreign policy challenges on our agenda, and we'll keep working toward resolutions that reflect our commitment to human rights and democratic values."

The report comes months after Blinken reaffirmed the United States' stance that China is committing genocide and crimes against humanity in its treatment of its Uighur citizens in its northwestern region of Xinjiang, a proclamation first made by the outgoing Trump administration that same month.

The State Department, along with Western allies, have accused China of interning more than 1 million Uighur and other Muslim minority citizens in Xinjiang internment camps where they are subjected to forced labor, sterilization and disappearances as well as torture.

China has also been accused of using the camps -- which its says are for the purpose of re-education to stamp out extremism -- to forcibly assimilate the Muslim citizens' thoughts and behaviors into its society at the expense of their culture and identity since at least 2017, according to the Congressional Research Service.

The report reaffirms that these crimes are being committed and the United States has pursued actions, including sanctions and export bans, to hold Beijing accountable.

It also names Myanmar at risk of committing atrocities and genocide following the military junta's early February coup that has attracted international condemnation, and vows the United States will continue to coordinate with allies to call for the return of power to its democratically elected leaders who were ousted and many of whom have since been jailed.

Many of the coup leaders, the report said, are responsible for the ethnic cleansing of Myanmar's Rohingya population in northern Rakhine state in 2016 and 2017.

Concerning Ethiopia, the report said its government and that of Eritrea are at risk of committing atrocities in West Tigray over their assault on rebel forces. The report was published after Blinken in March said "acts of ethnic cleansing" were being committed in the northern regional state. In May, he announced restrictions to foreign assistance to Ethiopia as well as imposing new defense trade controls on the government.

In South Sudan, the report said the government "has perpetrated extrajudicial killings, including ethnic-based killings of civilians, widespread sexual violence and use of food as a weapon of war."

In regards to IS, the report said the United States is committed to combating the risk it poses to civilians in Iraq and Syria while also calling out the regime of Syrian President Bashar al-Assad for atrocities including its use of chemical weapons.

"The U.S. government is committed to accountability for atrocities committed by the Assad regime, some of which amount to war crimes and crimes against humanity," it said.

Robert Faucher, acting assistant secretary at the State Department's Bureau of Conflict and Stabilization Operations, told reporters Monday that the report makes clear the United States' commitment to redouble its efforts to prevent and respond to atrocities being committed worldwide.

Faucher said in the three years since the Elie Wiesel Genocide and Atrocities Prevention Act was passed by Congress, under which the annual report is published, the State Department has trained thousands of officials in prevention work.

"With the submission of this report, the United States reaffirms that atrocity prevention must remain at the forefront of international peace and security efforts," he said. "Atrocity crimes pose some of the gravest threats to the rules-based international order that has helped bring peace and prosperity for more than seven decades."