Former President Donald Trump was banned from Facebook and other social platforms after his January 6 "Save America" rally near the White House and the attack on the U.S. Capitol that followed. File Pool Photo by Shawn Thew/UPI | License Photo

May 5 (UPI) -- The Facebook Oversight Board ruled Wednesday that former President Donald Trump will remain banned from the social media platform.

Trump was banned indefinitely from Facebook after the Jan. 6 attack by pro-Trump radicals at the U.S. Capitol and his posts related to the riot. The decision to uphold the ban had been turned over to the Oversight Board, an independent international body of 20 experts who review's the platform's weightier access decisions.

The Oversight Board was tasked with reviewing Facebook's decision, which it said was mostly correct.

"However, it was not appropriate for Facebook to impose the indeterminate and standardless penalty of indefinite suspension. Facebook's normal penalties include removing the violating content, imposing a time-bound period of suspension, or permanently disabling the page and account.

"The board insists that Facebook review this matter to determine and justify a proportionate response that is consistent with the rules that are applied to other users of its platform. Facebook must complete its review of this matter within six months."

The board also recommended that Facebook develop "clear, necessary and proportionate" policies that promote public safety and respect freedom of expression.

Critics have also questioned the independence of the Oversight Board, as it's paid for by Facebook and only seeks to absolve Facebook of any consequences from the decisions made.

The board, though, has overruled Facebook on six of nine previous banning decisions since it was formed last October. It has upheld Facebook bans twice and could not complete a ruling in the other case.

U.S. News // 33 minutes ago
Virginia lawmaker files lawsuit to limit 2 LGBT books to minors
May 20 (UPI) -- Tim Anderson, an attorney and a Virginia State Delegate, said he filed a lawsuit on behalf of Tommy Altman, who is running for Congress, this week in hopes to prevent two LGBT-themed books from being given to minors.

U.S. News // 3 hours ago
ATF: Privately made firearms make it harder to reduce illegal access to guns
May 20 (UPI) -- Increased output by gun manufacturers as well as privately made firearms drove an exponential increase in firearms available in the United States over the past two decades, according to a new study. 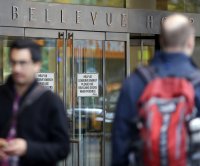