Chilly air, which has gripped the central United States all week, will be reinforced by another shot of cold weather early next week, forecasters said Saturday.

After a brief milder period this weekend, the latest frigid blast will cruise through the Plains beginning Monday, risking another round of frost and freeze damage for crops and sensitive plants.

After an entire week of below-average temperatures in the 30s and 40s, Grand Forks, N.D., is set to reach 55 degrees Fahrenheit on Saturday, which is also the normal high temperature for mid-April there.

Omaha, Neb., will see temperatures rising to near 60 degrees, about 2 degrees above or below normal this weekend, while Rapid City, S.D., can expect a high of 60 degrees Sunday after struggling to hit 35 on Thursday.

But residents may not want to get too comfortable with these barely mild conditions, as another wave of chill is on its way.

"By Monday, bitterly cold air will sweep southward out of Canada and build as far south as the southern Rockies and central Plains," said AccuWeather meteorologist Mary Gilbert. 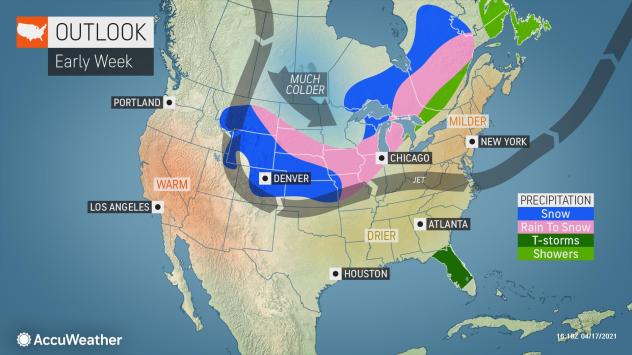 A strong cold front is forecast to escort this cold air into the central United States, also producing spring snow in areas, primarily from southern Canada to Kansas and Missouri.

"The mercury for some across the northern Rockies, as well as portions of the northern and central Plains will struggle to climb into the 30s F and 40s on Monday and overnight low temperatures will come crashing into the teens and 20s," said Gilbert.

The Mississippi Valley may be affected as well, according to AccuWeather lead long-range Forecaster Paul Pastelok said.

Temperatures may reach the freezing point across southern Kansas, central Missouri and northern Illinois during the early week, he said. "Temperatures for locations unlucky enough to be impacted by this brutally cold mass of air will encounter temperatures generally 10-20 degrees below average for mid-April. Some locations can even encounter departures from average up to 30 degrees," Gilbert said.

Afternoon snow is forecast to hinder Denver's ascent in temperatures on Monday, keeping the city from reaching any higher than 37, which is 25 degrees below normal. As snow continues through Monday night, temperatures are expected to drop into the teens. The city usually sits at a low of 34 in mid-April.

"On Tuesday, the core of the cold will spread even farther south into the southern Plains. High temperatures in the 40s and lower 50s will be common as far south as Oklahoma and the Texas Panhandle," Gilbert said.

Oklahoma City is expected to make a 37-degree dive from a high of 72 on Monday to a low of 35 degrees Monday night as the core of cold descends on the region.

These low temperatures, particularly at night, can be dangerous for sensitive and unprotected plants.

"Those across the affected area who have already begun to plant for the season will need to be prepared to protect their crops from near-freezing or even below-freezing temperatures," Gilbert said.

The chill from early next week across the Plains, Great Lakes and even much of the South will continue through most of the week, then will briefly start to moderate before another potential surge of cold air moves into the Plains and Midwest toward next weekend.

Chilly air may not retreat for a couple of weeks.

U.S. News // 26 minutes ago
Police search for gunman after shooting kills 1 at Tennessee HS graduation
May 19 (UPI) -- Police say that one person was killed in a shooting late on Wednesday at a high school graduation ceremony in central Tennessee, and another person was seriously injured by the gunfire.

U.S. News // 45 minutes ago
Senate expected to approve new $40 billion aid package for Ukraine on Thursday
May 19 (UPI) -- The Senate on Thursday is expected to pass a package worth tens of billions of dollars to send more aid and equipment to Ukraine to fend off Russian advances in the Eastern European nation.

U.S. News // 1 hour ago
Illinois becomes first state in Midwest to ban sale, possession of 'ghost guns'
May 19 (UPI) -- Illinois on Wednesday became the first state in the Midwest to enact a ban on ghost guns -- those that are manufactured privately and without serial numbers, which authorities are seeing more often in crimes.