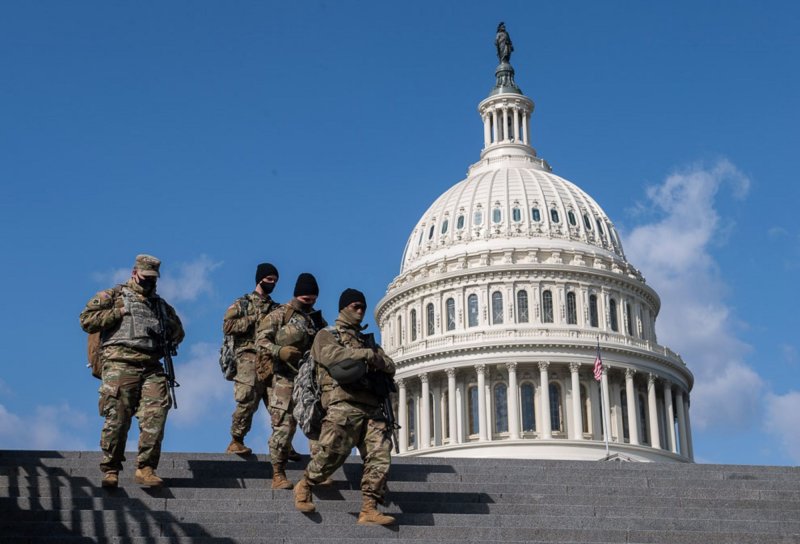 Members of the National Guard walk past the U.S. Capitol in Washington, D.C. on Thursday. The House of Representatives canceled its session today after receiving information about a possible security threat at the Capitol. Photo by Kevin Dietsch/UPI | License Photo

March 4 (UPI) -- The Senate clerk on Thursday afternoon began reading aloud all 628 pages of President Joe Biden's $1.9 trillion stimulus and COVID-19 relief bill, a process that's expected to take about 10 hours before the lawmakers can begin debate on the legislation.

The marathon reading came after Sen. Ron Johnson, R-Wis., voted against dispensing of the procedural step before debate can begin.

"I just objected to skipping past the reading of the Democrats' 628-page bill that was just introduced minutes ago," Johnson tweeted. "If they're going to add nearly $2T to the national debt at least we should know what's in the bill."

The Senate convened at noon despite warnings from U.S. Capitol police that there could be a threat from far-right radicals loyal to former President Donald Trump. The House was not in session Thursday due to the threat.

The House passed the aid package last weekend, but two aspects have since been changed.

The provision to raise the federal minimum wage requirement to $15 per hour will no longer be part of the bill and Biden has agreed to impose greater income restrictions for Americans to receive the $1,400 direct stimulus payment.

Biden agreed to the new limits after speaking with Senate Democrats on Monday, some of whom have expressed concern that the large-scale relief package may be sending stimulus aid to Americans who don't need it -- a point of concern that most Republicans have raised for every stimulus payment given so far.

After the reading Thursday, senators will introduce a motion to begin 20 hours of debate.

It is possible that the debate on the bill could be postponed. Some senators are waiting on word from the Congressional Budget Office and Congressional Joint Committee on Taxation to report the total cost of the Senate version of the bill, USA Today reported Thursday.

There is support for Biden's aid package among most Democratic and Republican Americans. Pollster Gallup found last month that two-thirds of Americans approve of the way Biden is handling the coronavirus response and the approval rate for Congress is the highest it's been since 2009.

Senate Republican leader Mitch McConnell, the minority leader, has opposed the bill as excessive and says it includes too many provisions.

Democrats in the chamber, however, don't need any Republican support to pass the bill. They are attempting to pass the package through the budget reconciliation process, which only requires a simple majority.

The Senate is split 50-50 among Democrats and Republicans but Vice President Kamala Harris, in her role as Senate president, would cast any tie-breaking votes.

During a visit to a Virginia business Wednesday, Harris said Biden's plan includes $15 billion for small businesses nationwide. She visited Fibre Space in Alexandria, a female-owned business that sells supplies like knitting instruments and yarn.

"We've been paying a lot of attention to the fact that during COVID, two and a half million women left the workforce," she said.

At an event Wednesday night, Biden thanked House lawmakers for passing the measure and encouraged them to continue supporting it, which he says is vital for U.S. recovery from the coronavirus crisis.

"Staying unified as we complete this process to pass the American Rescue Plan won't just make a difference in our fight against COVID-19 and our efforts to rebuild the economy, it will also show the American people we are capable of coming together for what matters most to them," he said at the House Democratic Caucus event.

"They've lost faith in government. This is a time to re-establish that faith. And the reason why they should have faith is because we're doing the right thing."

Wednesday, ADP and Moody's analytics said in their monthly labor assessment that U.S. companies added about 117,000 private-sector jobs during the month of February. Most economists had expected the report to show about 230,000 new jobs added last month.

The Labor Department will issue its official February jobs report on Friday.

Late Wednesday, the House decided not to convene on Thursday due to warnings from law enforcement of a possible far-right plot by pro-Trump radicals to break into the Capitol again and target Democratic lawmakers.

Multiple measures, including military personnel, security fencing and razor wire, have been at the Capitol complex since rioters loyal to Trump attacked the building on Jan. 6 in a bid to disrupt Congress from certifying Biden's election win in November. A small number of believers of certain thoroughly debunked conspiracies expect Thursday will be the day Trump returns to power.

FBI Director Christopher Wray and Army Maj. Gen. William Walker were among several witnesses who testified in Congress this week to face questions about the January Capitol attack.

U.S. News // 1 hour ago
Teenage girl loses leg after shark attack in waters off Florida Panhandle
July 1 (UPI) -- A teenage girl has lost her leg, but is alive, after she was attacked by a shark along the coast in northwestern Florida on Thursday, authorities said.

U.S. News // 4 hours ago
Even with high gas prices, record travelers taking July 4th road trips
July 1 (UPI) -- The number of people who travel far distances in the United States this year over the July 4th weekend is expected to return to pre-COVID-19 levels -- just as gas prices are starting to drop.

U.S. News // 5 hours ago
4 dead in Texas after police chase ends with crash near U.S.-Mexico border
July 1 (UPI) -- A Jeep being chased by police on suspicion of human smuggling smashed into a tractor-trailer in Texas near the U.S.-Mexico border, killing four people and critically injuring three others.

U.S. News // 14 hours ago
'Cloned' truck made it easy for smugglers to pass border, officials say
June 30 (UPI) -- Steve McCraw, director of the Texas Department of Public Safety, said that once a smuggler has assumed a legitimate truck's identity, it's easy for them to slip through border inspections.
Advertisement