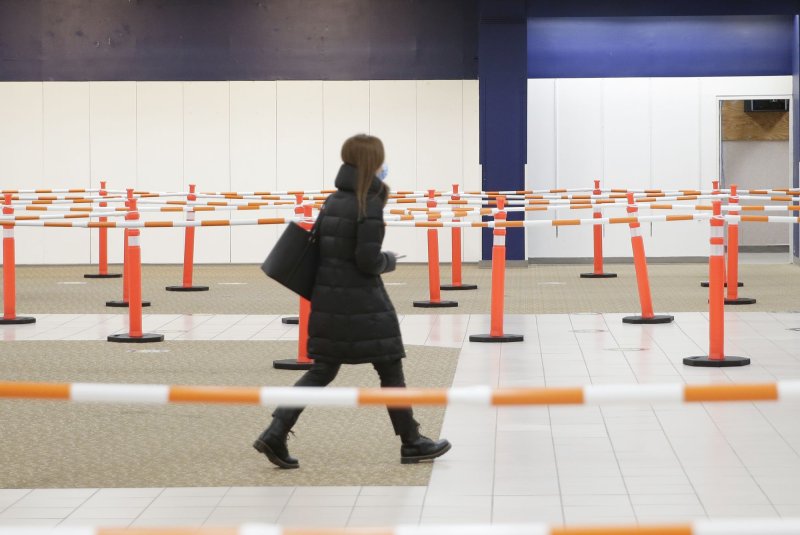 The United States has surpassed 25 million COVID-19 cases in addition to 417,000 deaths on Sunday, as the University of Michigan canceled all athletic activities for two weeks.  Photo by John Angelillo/UPI | License Photo

Jan. 24 (UPI) -- The United States surpassed 25 million COVID-19 cases on Sunday, as the University of Michigan canceled all athletics for two weeks after reporting a case of the variant of the virus first discovered in Britain.

Since the start of the pandemic, the United States has reported a total of 25,003,695 cases and 417,538 deaths, leading the world in both categories, according to data gathered by Johns Hopkins University.

On Satuday, the United States reported 169,935 new cases and 3,292 deaths, according to Johns Hopkins.

In a statement on Saturday, the University of Michigan announced that it would halt all athletic activity in all sports "including games, team and individual training sessions" for up to two weeks after discovering a case of the B.1.1.7 COVID-19 variant.

Student-athletes, coaches and team staff are also required to quarantine until at least Feb. 7 and the university added that there was no determination on how the pause would affect games scheduled beyond that date.

"Canceling competitions is never something we want to do but with so many unknowns about this variant of COVID-19, we must do everything we can to minimize the spread among student-athletes, coaches, staff and to the student-athletes at other schools," Director of Athletics Warde Manuel said.

Dr. Anthony Fauci, director of the National Institute for Allergy and Infectious Diseases, said last week that the variant, first discovered in Britain and since reported in at least 20 U.S. states, is at least twice as transmissible as the original strain.

RELATED Poll: Half in U.S. still not wearing masks when out in public

Fauci, in a news briefing on Thursday, stressed that it was important to get Americans vaccinated against the coronavirus in order to reduce the likelihood of the virus replicating and producing new mutations.

In an interview with NBC News' Meet the Press on Sunday, President Joe Biden's White House chief of staff, said that the Trump administration did not actually have an adequate plan to widely distribute vaccines.

"The process to distribute a vaccine, particularly outside of nursing homes and hospitals, out into the community as a whole did not really exist when we came into the White House," he said. "As everyone in America has seen, the way in which people get the vaccine is chaotic, it's very limited."

Florida reported 9,535 new cases and 129 new resident deaths bringing its totals to 1,649,449 infections and 25,293 Floridian fatalities since the start of the pandemic.

U.S. News // 3 hours ago
Former Army reservist convicted of being Chinese agent
Sept. 27 (UPI) -- A former U.S. Army reservist was convicted of acting within the United States as an illegal agent of the People's Republic of China, the Justice Department confirmed on Tuesday.

U.S. News // 10 hours ago
FEMA to Florida residents: Don't underestimate Hurricane Ian's strength
Sept. 27 (UPI) -- Evacuations have stepped up along the Florida Gulf Coast and Tampa Bay as Hurricane Ian intensifies to a Category 3 hurricane ahead of its expected landing in the Sunshine State.

U.S. News // 7 hours ago
Legal organization sues to stop Biden's student debt forgiveness
Sept. 27 (UPI) -- A nonprofit legal group that aims to fight "government overreach" sued the U.S. Department of Education on Tuesday, seeking to block the Biden administration's move to forgive up to $20,000 in student debt per borrower.

U.S. News // 10 hours ago
U.S. government funding proposal may be a non-starter
Sept. 27 (UPI) -- Energy proposals included in a continuing funding resolution by U.S. Sen. Joe Manchin, a Democrat representing West Virginia, could kill the progress of a measure meant to keep the federal government functioning.