Trump to visit California for briefing on wildfires

President Donald Trump, shown here on the 19th observance of the 911 terrorist attack on America on Friday, plans to visit California for a briefing on wildfires in the west. Photo by Archie Carpenter/UPI | License Photo

Sept. 12 (UPI) -- President Donald Trump plans to visit California on Monday to meet with Gov. Gavin Newsom and emergency response officials for a briefing on wildfires that have torn through the state since mid-August, according to a White House official.

"Since mid-August, President Trump and Governor Newsom have spoken by phone and the White House and FEMA have remained in constant contact with State and local officials throughout the response to these natural disasters,'' White House spokesman Judd Deere said in an email to Politico. "The President continues to support those who are battling raging wildfires in a locally-executed, state-managed, and federally-supported emergency response."

Trump was already set to visit Minden, Nevada, for a rally Saturday.

He had planned to visit Reno, but the Reno-Tahoe Airport Authority rejected the plan because the 5,000 plus expected visitors would violate the state's and local county's directives on public gatherings.

According to Deere, the meeting will take place at McClellan Park, a former Air Force Base near Sacramento.

Fires have burned across California since mid-August and have also broken out in mid-September in parts of the Northwest best known for heavy rainfall and cool temperatures.

Deere also noted that Trump has approved a Presidential Major Disaster Declaration for California that began Aug. 14 and mentioned Trump's 2018 visit to California following a series of fires that year.

"The Administration has also approved 10 Fire Management Assistance Grants and 24 grants for other western states, which provides a 75% Federal cost share for the mitigation, management, and control of fires," Deere wrote. "More than 26,000 federal personnel and 230 helicopters have been deployed to the region to fight these fires."

U.S. News // 2 hours ago
Appeals court says CDC exceeded authority with eviction moratorium
July 23 (UPI) -- A federal appeals court ruled Friday that the U.S. Centers for Disease Control and Prevention overstepped its authority when it imposed a moratorium on evictions amid the COVID-19 pandemic.

U.S. News // 13 hours ago
Rare FAA rules change means Blue Origin crew may not get official 'wings'
July 23 (UPI) -- Federal aviation regulators have made a rare change to the requirements for its Commercial Astronaut Wings Program, meaning Blue Origin founder Jeff Bezos may not officially be recognized for his spaceflight this week. 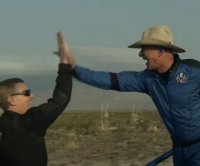