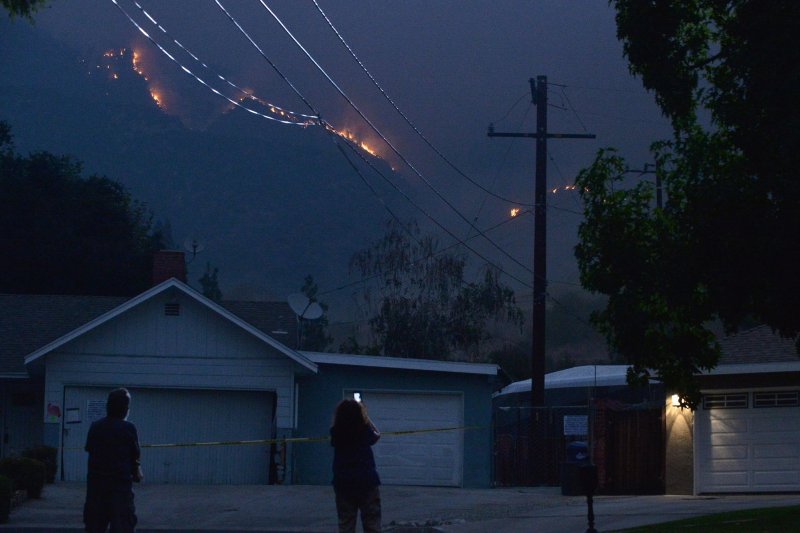 Flames from the Bobcat Fire appear above homes in the foothills of Monrovia, Calif. on Friday. Photo by Jim Ruymen/UPI | License Photo

The downtown Los Angeles skyline is shrouded in smoke from the Bobcat Fire. Photo by Jim Ruymen/UPI | License Photo

Smoke fills the skies across several states as dozens of wildfires dot the region. Photo courtesy of NASA | License Photo

The new law comes as the state battles its worst wildfire season in recorded history. The California Department of Forestry and Fire Protection said dozens of fires have burned some 3.1 million acres of land in recent weeks.

"This legislation rights a historic wrong and recognizes the sacrifice of thousands of incarcerated people who have helped battle wildfires in our state, and I would like to thank the Legislature for passing this bill," Newsom said Friday after signing the law.

RELATED Earthquake may have destroyed Canaanite palace 3,700 years ago

Under the law, former inmates can petition the state to expunge their records and waive parole time in order to have careers in emergency response.

"Signing AB 2147 into law is about giving second chances. To correct is to right a wrong; to rehabilitate is to restore," Assemblymember Gomez Reyes said. "Rehabilitation without strategies to ensure the formerly incarcerated have a career is a pathway to recidivism. We must get serious about providing pathways for those that show the determination to turn their lives around."

The state is experiencing an unprecedented wildfire season, with five of the state's Top 10 largest wildfires in history currently burning.

One of the fastest-growing blazes, the August Complex, exploded to more than 491,000 acres with 25% containment Friday. Situated in the Mendocino National Forest, U.S. officials said it was the largest fire in California history. It comprises several fires that have merged, include the Doe Fire.

Emergency officials have evacuated residents from multiple counties in its vicinity. The blaze killed one firefighter in late August.

Overall, fires in the West have killed at least two dozen people, including 19 in California, seven in Oregon and one in Washington. The most deadly blaze is the North Complex of fires, which has burned more than 252,000 acres and killed at least 10 people in Butte, Plumas and Yuba counties. The blaze was 23% contained as of late Friday.

In Oregon, some 60 people were unaccounted for as blazes scorched more than a million acres. Among the dead were a 13-year-old boy found huddling his dog inside a vehicle and the boy's grandmother in Lyons.

Most of those unaccounted for were residents of Jackson County, location of the Holiday Farm Fire.

"Mariana has led with grace, transparency and courage," Gov. Kate Brown said in a statement. "She embodies the experience Oregon needs to face this crisis, in this moment."

Officials did not say why Walker, who had served in the role since 2014, was removed.

Also on Saturday, a spokesman for Facebook said the service would begin removing posts containing claims that wildfires in Oregon were set by certain groups.

This is consistent with our past efforts to remove content that could lead to imminent harm given the possible risk to human life as the fires rage on. (2/2)— Andy Stone (@andymstone) September 12, 2020

Since Thursday law enforcement officials and local media outlets have attempted to dispel rumors that antifascist activists deliberately set the fires, and reporters have described being stopped by people carrying guns as they attempt to survey the damage.