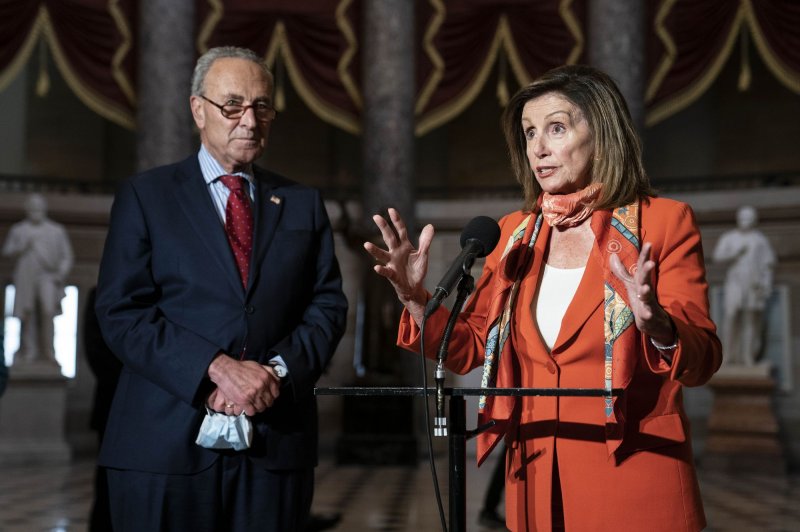 Aug. 4 (UPI) -- Though congressional Democrats and White House negotiators say they're still far apart on reaching a deal on a new coronavirus relief package, they hope to come to an agreement by the end of the week.

House Speaker Nancy Pelosi, D-Calif., and Senate Democratic leader Chuck Schumer of New York met Tuesday with Treasury Secretary Steven Mnuchin and White House chief of staff Mark Meadows in another round of talks to hammer out the details.

Schumer told reporters after the meeting that they made progress on negotiations.

Pelosi said she's hoping to have a final stimulus deal agreed upon this week.

"We're not at the point of being close to a deal, but we did try to agree to set a timeline," he said after the meeting. "We're going to try to reach an overall agreement, if we can get one, by the end of this week -- so that legislation could then pass next week."

"Wherever this thing settles between the president of the United States and his team, that have to sign it into law, and the Democrat not insignificant minority in the Senate and majority in the House, is something I'm prepared to support event if I have some problems with certain parts of it," he said after Tuesday's Senate Republican lunch.

President Donald Trump later in the afternoon reiterated his threat that he'd sign an executive order to provide eviction protections and extra unemployment benefits if there was no agreement by the end of the week.

"We are looking at it," he said during a news conference. "We're also look at various other things I am allowed to do under the system."

One of the main focuses of the legislation is an enhanced federal unemployment benefit that had paid out-of-work Americans an extra $600 each week, which was part of the first relief package, the CARES Act, in March.

Senate Republicans introduced their $1 trillion coronavirus relief package last week, including direct stimulus payments and a cut to unemployment benefits. It also includes a extension of the Paycheck Protection Program and funding to reopen schools.

One of the most contentious provisions would reduce weekly federal unemployment payments from $600 to $200, while states would adopt a system to provide about 70% of wage replacement for workers who have been laid off.

Democrats have opposed the package, instead backing a $3 trillion proposal passed by the House in May.

U.S. News // 8 hours ago
Abortion rights council calls on California to pay for out-of-state patients if Roe vs. Wade falls
Dec. 8 (UPI) -- A council made up of abortion rights and women's health advocates recommended Wednesday that California prepare to provide abortion access -- and funding -- to all Americans if the Supreme Court overturns Roe vs. Wade.