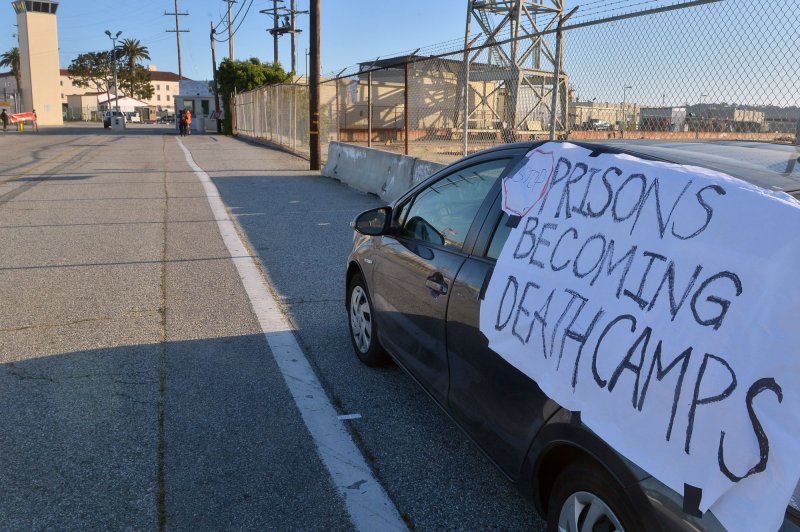 A group of activists protest outside the Federal Correctional Institution in San Pedro, Calif., on May 2. On Tuesday, the Supreme Court ruled that the Federal Bureau of Prisons must comply with a lower judge's ruling transferring medically vulnerable prisons in Ohio to safer locations during the coronavirus pandemic. Photo by Jim Ruymen/UPI | License Photo

May 26 (UPI) -- The Supreme Court on Tuesday declined to block a lower court's order requiring the federal government to transfer medically vulnerable inmates in Ohio to safer conditions during the coronavirus pandemic.

The high court voted in favor of leaving in place a federal judge's order in April, which said the Elkton Federal Correctional Institution near Canton must identify prisoners who could be transferred to home confinement or safer prisons, or given compassionate release or furlough. Supreme Court Justices Samuel Alito, Neil Gorsuch and Clarence Thomas dissented.

The federal judge's order would've made about 800 prisoners at higher risk of catching COVID-19 eligible for transfers, but the American Civil Liberties said the prison didn't carry out the order. District Judge James Gwin issued another order in May to enforce the earlier ruling.

"We commend the court for choosing to reaffirm the rights of the people incarcerated at Elkton prison, for whom a prison sentence must not become a death sentence," ACLU national legal director David Cole said.

The Federal Bureau of Prisons said 162 inmates and seven staff members at the Ohio prison have tested positive for the virus. The low-security prison houses about 2,500 inmates.

In April, Attorney General William Barr expedited his directive to release inmates at high risk for severe illness related to the novel coronavirus. He specifically cited the Elkton prison -- where nine people have died -- in his directive.

"We are experiencing significant levels of infection at several of our facilities," Barr said. "We have to move with dispatch in using home confinement when appropriate to move vulnerable inmates out of these institutions."

"A judicial order peremptorily requiring the removal of over 800 inmates from a federal prison based on an alleged Eighth Amendment violation -- in the midst of a pandemic -- presents extraordinarily significant questions and should not be imposed without this court's review."