Jan. 31 (UPI) -- Marie Yovanovitch, the former U.S. ambassador to Ukraine who said there was a smear campaign to have her dismissed last year, has retired from her 33-year career as a diplomat, sources with knowledge of the development said Friday.

NPR was the first to report on her retirement, citing unnamed sources.

It's unclear how long ago Yovanovitch retired from the State Department, but a source told CNN it's been within the past two weeks.

The State Department recalled her from Ukraine in April, though she remained employed by the department. Her dismissal has figured into the impeachment of Trump, who discussed her with Ukrainian President Volodymyr Zelensky in a July phone conversation that ultimately prompted the probe.

RELATED Video: 'Take her out,' Trump appears to say about Ukraine envoy

According to a transcript of the call, Trump told Zelensky that Yovanovitch was "bad news."

"She's going to go through some things," the U.S. president said.

Yovanovitch testified during the impeachment inquiry in October there had been a smear campaign against her, leading to her ouster as ambassador.

She said a State Department employee told her "there had been a concerted campaign against me, and that the Department had been under pressure from the President to remove me since the summer of 2018."

"He also said that I had done nothing wrong and that this was not like other situations where he had recalled ambassadors for cause."

She said she was disappointed how events unfolded and the resignations of so many federal employees.

"Today, we see the State Department attacked and hallowed out from within," she said. "State Department leadership, with Congress, needs to take action now to defend this great institution, and its thousands of loyal and effective employees." 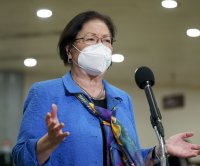 U.S. News // 9 hours ago
Supreme Court rules unanimously against FTC's ability to get restitution
April 22 (UPI) -- The Supreme Court ruled Thursday that a provision does not give the Federal Trade Commission authority to seek monetary relief in a consumer redress case.