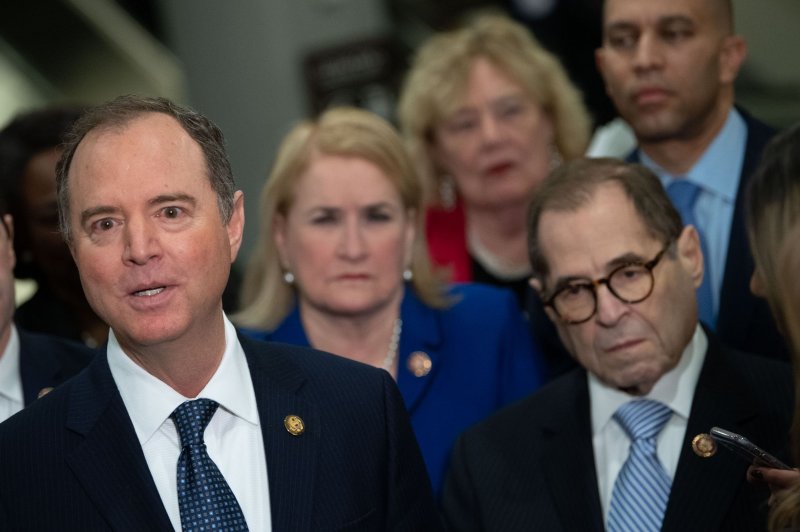 The Senate began opening arguments on Wednesday from House Democratic managers, who will lay out their case against President Donald Trump. Photo by Pete Marovich/UPI | License Photo

Rep. Adam Schiff, D-Calif., led the group of House managers as he called on senators to act as impartial jurors as he opened Day Two after a late night Tuesday.

"It is up to you to be the tribunal Hamilton envisioned," Schiff said, quoting founding father Alexander Hamilton's Federalist Papers.

"It is up to you to show the American people and yourselves his confidence and those of the other founders was rightly placed. The Constitution entrusts you to the responsibility of acting as impartial jurors, have a fair trial and weigh the evidence before you, no matter what your party affiliation or vote in the previous election or the next. Our duty is to the Constitution and the rule of law."

Schiff, D-Calif., accused Trump of using his power "to cheat" and said if he's not removed from office, he will "permanently alter the balance of power" between the branches of government.

"The president has shown that he believes that he is above the law and scornful of restraint," he said.

Rep. Jerrold Nadler, D-N.Y., took up the Democratic arguments next and reinforced Schiff's accusations that Trump's actions toward Ukraine -- including the ousting of U.S. Ambassador Marie Yovanovitch -- were primarily intended as a means to cheat in the 2020 election.

"Please remember that the object of the president's Ukraine scheme was to obtain a corrupt advantage for his re-election campaign," Nadler said. "As we will show, the president went to extraordinary lengths to cheat in the next election. That scheme begins with the attempt to get Ambassador Yovanovitch 'out of the way.'"

Rep. Sylvia Garcia, D-Texas, focused on the involvement of Trump's personal attorney, Rudy Giuliani, and his associates with Ukraine.

"For this campaign to be truly beneficial to his boss, President Trump, Giuliani needed access to the new government in Ukraine. He dispatched associates, Lev Parnas and Igor Fruman, to try to make inroads with the Zelensky team," Garcia said. "As Giuliani and his associates worked behind the scenes to get access to the new leadership in Ukraine, President Trump was publicly signaling his interest in the investigations."

"Ukraine experts at DOD, the State Department and the White House emphasized that it was in the national security interests of the U.S. to continue to support Ukraine in its fight," Crow said. "But it wasn't just the national security concern, because many people thought that the hold was just outright illegal -- and they were right. It was."

Rep. Val Demings, D-Fla., called for the presentation of evidence, specifically that concerning a White House meeting Trump withheld from Ukrainian President Volodymyr Zelensky in part of the alleged plan to pressure him to investigate Democratic presidential candidate Joe Biden and his son last year.

Opening statements began Wednesday afternoon, one day after senators debated the rules and timeline of the trial, ultimately voting down a number of proposed amendments by Democrats.

Schiff on Wednesday evening rebuked Republicans for voting against the amendments seeking subpoenas of White House documents and testimony.

At the end of the proceedings, Chief Justice John Roberts announced that a single one-page classified document identified by House managers that concerns the testimony of Jennifer Williams, a national security aid to Vice President Mike Pence, will be made available to senators but will not be made part of the public record.

The Democratic House managers have three days, beginning Wednesday, to make their opening arguments and present their case against Trump -- which accuses the president of abusing his power in trying to pressure Ukraine to investigate the Bidens. Trump is also charged with obstructing the House investigation that followed.

Senate Republican leader Mitch McConnell passed his rules resolution on Tuesday, which allowed both Democrats and White House attorneys an extra day to lay out their case. Both sides have three days to complete their allotted 24 hours of opening arguments.

The trial will then move into the questioning stage, followed by an off-ramp period -- one of the trial's most critical phases, during which senators will consider various motions, like whether to dismiss the charges and subpoena witnesses, as Senate Democrats have been fighting to do.

If the trial continues and witnesses and new evidence are allowed, the Senate would then stage an evidence vote and several days of witness testimony. A few days of closing arguments, deliberations and a final verdict would then complete the trial.

Senate Democratic Leader Chuck Schumer said a deal to allow Republicans to call witnesses such as Joe Biden's son, Hunter Biden, in exchange for them allowing Democrats to seek testimony from witnesses such as former national security adviser John Bolton was "off the table."

"First of all, the Republicans have the right to bring in any witness they want," he said. "They haven't wanted to, and that trade is not on the table."

Joe Biden said Wednesday he would not participate in such a swap.

"The reason I would not make the deal, the bottom line is, this is a constitutional issue," he said. "We're not going to turn it into a farce or political theater. I want no part of that."

U.S. News // 9 hours ago
FDA says Emergent failed to train workers to safely make J&J COVID-19 vaccine
April 21 (UPI) -- Federal regulators said in a report Wednesday that a contractor that Johnson & Johnson paid to produce tens of millions of doses of its COVID-19 vaccine failed to ensure safe conditions at its Baltimore plant.