The post is a show of support for two employees who were warned by Amazon this month for violating company rules. File Photo by Friedemann Vogel/EPA-EFE

Jan. 27 (UPI) -- Hundreds of Amazon employees are defying company rules -- which bar workers from speaking publicly about official business -- by posting a list of criticisms online that oppose the tech giant's actions related to climate change.

A group of 357 workers, under the banner Amazon Employees for Climate Justice, posted the complaints about environmental and other matters to the platform Medium. By doing so, they broke company rules and are risking their jobs.

The demonstration is a show of support for two Amazon employees who were given warnings earlier this month for criticizing the e-commerce giant's policies on climate change.

"We are scared. But we decided we couldn't live with ourselves if we let a policy silence us in the face of an issue of such moral gravity like the climate crisis," the group tweeted Monday.

Criticisms posted to Medium include a range of criticisms. Engineer Michael Sokolov wrote, "Expecting its employees to maintain silence on these issues, and Amazon's impact on them, is really a reprehensible overreach, and I am proud to take this opportunity to demonstrate my unwillingness to comply."

"Amazon and AWS are failing at truly thinking long term by refusing to do the right thing and continuing to aid industry in destroying the planet for short term profits," wrote Eric Lobdell of AWS.

"I stand with these Amazon employees who are courageously speaking out," he tweeted. "They are telling [CEO] Jeff Bezos to end his hypocrisy: You cannot call your corporation a 'leader' on climate change while partnering with ExxonMobil and BP to extract more fossil fuels."

Amazon said employees have ample internal opportunity to express their views about company policies, and reiterated it would continue to enforce its policy against making criticisms public.

"While all employees are welcome to engage constructively with any of the many teams inside Amazon that work on sustainability and other topics, we do enforce our external communications policy and will not allow employees to publicly disparage or misrepresent the company or the hard work of their colleagues who are developing solutions to these hard problems," Amazon spokesperson Jaci Anderson told CNBC. 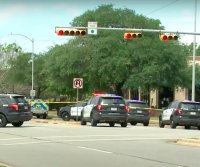