Sanders, 78, was discharged from the Desert Springs Hospital Medical Center two days after he underwent an emergency procedure to insert two stents in his heart. Doctors found one artery was partly blocked after he experienced chest discomfort.

"Sen. Sanders was diagnosed with a myocardial infarction," his doctors, Arturo Marchand Jr. and Arjun Gururaj said in a statement.

"The senator was stable upon arrival and taken immediately to the cardiac catheterization laboratory, at which time two stents were placed in a blocked coronary artery in a timely fashion. All other arteries were normal."

Sanders' campaign said Thursday he planned to return home to Burlington, Vt., to rest for a few days before returning to the campaign trail. His wife, Jane Sanders, said he plans to participate in the Oct. 15 debate.

"I want to thank the doctors, nurses, and staff at the Desert Springs Hospital Medical Center for the excellent care that they provided. After two and a half days in the hospital, I feel great, and after taking a short time off, I look forward to getting back to work," Sen. Sanders said in a tweet after his release from the hospital.

U.S. News // 19 minutes ago
U.S. implements travel restrictions for DRC, Guinea amid Ebola outbreaks
Feb. 27 (UPI) -- The U.S. government is implementing new measures to prevent the spread of the Ebola virus by travelers from Guinea and the Democratic Republic of Congo entering the country 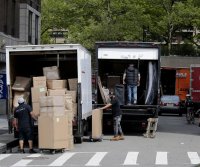