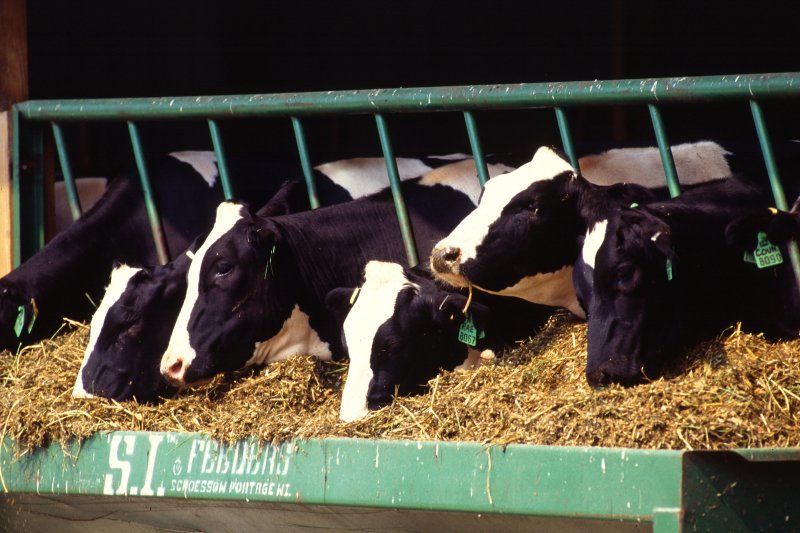 EVANSVILLE, Ind., Sept. 20 (UPI) -- A growing number of dairy farmers across the country want the federal government to regulate the volume of milk their industry produces annually.

The oversupply has driven milk prices so low that the average farm is losing money. Thousands of dairies have gone out of business in the last five years, and more continue to fail.

Yet the United States' milk supply continues to eclipse demand -- and that does not appear to be changing. Production increases every year, rising by about 1 percent in 2018, according to the U.S. Department of Agriculture. In August, it was up about 0.4 percent over the same month last year.

"Milk production is happening in an unsustainable way," said Lynne McBride, executive director of the California Dairy Campaign, which advocates for federal dairy supply management. "Our members think we need a change, or we'll see more dairies go out of business."

The organization is circulating a petition asking Congress to control the milk supply. Hundreds of farmers have signed it, McBride said.

But the movement faces steep opposition. The very concept of government supply regulation flies in the face of the free-market principles on which the American economy is rooted, industry leaders said.

"Supply management programs generate a lot of criticism ... in general because government is making a massive invasion into the free market," said Alan Bjerga, a spokesman for the National Milk Producers Federation.

Although groups like the California Dairy Campaign and the National Farmers Union loudly support supply management, most dairy farmers are quietly against it, Bjerga said.

Shortly before negotiations began on the 2018 Farm Bill, the National Milk Producers Federation, which represents the majority of America's dairy farms, asked its members if they wanted to push for supply management.

More recently, the American Farm Bureau Federation this year sent out a similar survey to its members. The majority also voted against it.

The reasons for opposing supply management are diverse. Despite the depressed prices, some dairy operations are making good profits, said Charles Nicholson, a professor of applied economics and management at Cornell University. Those dairies do not want their production restricted. Even among farmers who are losing money, many are opposed in principle.

"A lot of people don't think government should be involved in regulating markets," Nicholson said. "They don't want the government looking over their shoulder."

But one of the biggest reasons why farmers oppose the proposal might be that previous attempts to regulate milk supply failed.

The most recent attempt came during negotiations on the 2014 Farm Bill. The dairy industry as a whole, led by the National Milk Producers Federation, asked Congress to pass a "mild form of supply management," Bjerga said.

The program proposed "levying a financial penalty on dairy farmers who did not reduce their milk supply" when prices hit a predetermined level, John Newton, a chief economist with the American Farm Bureau Federation, said in a statement.

The program was hotly debated and ultimately rejected, leaving farmers with little support in the ensuing years of low milk prices. And those years were hard on dairy farmers.

In 2014, farmers saw record-high milk prices. Many responded by adding cows to their herds so that they could sell more milk for the high price. But the pendulum swung too far. By the next year, dairies were pumping out more milk than the market could handle, and prices plummeted.

"Dairy is challenging because when prices increase, farmers add more cows to production," Bjerga said. "They collectively overshot the target. Now, the demand isn't so high, but you can't turn the cows off."

Because of this, it generally takes the dairy industry several years to respond to market fluctuations, with dairies going out of business, thereby reducing nationwide milk production, Bjerga said.

"There is a market response in dairy, but it tends to be a little longer and more painful than other commodities," he said.

When it came time to negotiate the 2018 Farm Bill, the National Milk Producers Federation pushed for a federally subsidized insurance program instead of supply management. That program was ultimately included in the final bill. It's called the Margin Protection Program. It's relatively cheap for farmers to buy the insurance and generous when milk prices drop, Nicholson said.

The program might provide relief to struggling dairies -- at a cost to taxpayers. A recent Cornell study showed the program could cost taxpayers more than a $1 billion in the first year.

"It may end up paying out a lot more than it takes in in premiums, depending on what happens with the market," Nicholson said.

Proponents of supply management point to this as a reason to look seriously at regulating production instead. Previous Cornell studies have shown that managing supply could effectively stabilize milk prices and save farms, Nicholson said.

Success would depend largely on whether the federal government could adequately determine the level of domestic demand for milk and then create a program to efficiently enforce it, Nicholson said.

One way to do this would be for the government to set a limit to how much dairy producers are allowed to grow in a given year, depending on market conditions. Any farmer who wants to exceed that allowed growth would have to pay a penalty.

"There are different ways to do it," McBride said. "We don't have all the details ironed out. But we should all be able to figure out how much milk is needed."

U.S. News // 1 hour ago
TSA screens 5 million passengers in week before Thanksgiving
Nov. 26 (UPI) -- More than 5 million travelers were screened by the U.S. Transportation Security Administration between Friday and Wednesday amid the Thanksgiving holiday.

U.S. News // 5 hours ago
Donor sues pro-Trump group to recoup $2.5M in failed election lawsuits
Nov. 26 (UPI) -- A North Carolina businessman and Republican donor filed suit in federal court saying he was duped by a Texas group that claimed they would file lawsuits to uncover election fraud on behalf of President Donald Trump.

U.S. News // 8 hours ago
U.S. COVID-19 daily cases pass 180K; death toll approaches spring spike
Nov. 26 (UPI) -- The number of COVID-19 cases reported in the United States has risen for the fourth straight day and the one-day death toll is approaching numbers not seen since the spring, according to Johns Hopkins University.

U.S. News // 20 hours ago
Justice Dept. appeals ruling barring it from Trump defamation case
Nov. 25 (UPI) -- The Justice Department on Wednesday appealed a court's decision to block it from interfering in a defamation case brought against President Donald Trump by E. Jean Carroll, who said the president raped her in the 1990s.