The Justice Department announced Monday that it will seek the death penalty for Robert Bowers, the accused gunman in the shooting at the Tree of Life Synagogue in Pittsburgh last year. File Photo by Archie Carpenter/UPI | License Photo

Aug. 26 (UPI) -- Federal prosecutors will seek the death penalty for the man accused of killing 11 people at a Pittsburgh synagogue last year.

The Justice Department on Monday filed to seek the death penalty against Robert Bowers, 46, for carrying out the shooting at the Tree of Life Synagogue on Oct. 27.

The filing Monday stated that Bowers killed all 11 victims and "intentionally participated in an act, contemplating that the life of a person would be taken and intending that lethal force would be used."

Bowers pleaded not guilty to the federal charges, but his defense team expressed interest in reaching a plea deal for a life sentence instead of bringing the case to trial.

Minnesota man arrested in shooting deaths of his parents March for Our Lives unveils proposal for gun control laws Autopsy: Dayton shooter had drugs in his system, two victims struck by police gunfire 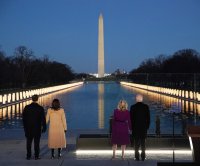