Aug. 5 (UPI) -- As more consumer options for greener technologies emerge in the United States, there's a power struggle for control of the electricity market -- between customers and vendors of solar power and utilities that deliver and sell volts to the masses.

Net metering -- excess power from a renewable source, like solar, that's fed into the public grid, usually for customer credit -- is becoming more popular among Americans and environmental advocates nationwide. But they're up against a powerful lobby that views the green alternative as a threat to its profits.

Jimmy Hosch installed solar panels at his Dallas home to do his part to fight climate change. On a hot Texas summer day, his 10-kilowatt system can provide most of the power to his 2,400-square-foot home, plus charge his fully electric Nissan Leaf and hybrid Chevrolet Volt.

"I bought it outright when three rebates came together at the same time," he said. "It's not going to get any cheaper, so I pulled the trigger. That has worked out really well."

Hosch said he bought the system out of a sense of duty to his three grandchildren.

"They're going to be asking me, 'What the hell were you thinking when you were burning everything in sight for energy?'"

But in addition to environmental motives, going green must also make at least some economic sense for most homeowners. Most states have net metering rules to compensate solar customers for contributing to the power grid, but it only works in regulated areas where the same company owns lines and sells power. For deregulated areas where power providers and sellers are not the same company, the picture gets murky.

"It makes the economics of solar more challenging," said Ben Delman, communications director for Washington, D.C.,-based Solar United Neighbors. "As the market for solar on the residential side grows, there's going to be a market for more retail electric providers to do net metering."

"The price is the same going both directions," said manager Daniel Richmond of Green Mountain Energy in Texas, which offers a full buyback rate. "We will buy back as much power as the customer sends us. We don't cap a certain amount of buyback from the customer. That gives you the full credit for the power you produce on your roof."

GME also offers renewable energy credits and a rebate that helps customers save up to buy a solar panel system. In Texas alone, where oil-driven industry ruled for decades, solar power has grown by 50 percent in the past year and has produced enough energy for 350,000 homes, Richmond said.

Many utilities, however, have no incentive to offer a full 1-to-1 buyback rate for their excess solar electricity -- and critics say that poses a major obstacle to the green movement. Because the power industry has the third-largest lobby in the United States, politics is another roadblock. The industry spent $2.4 billion between 1998 and 2018 lobbying lawmakers and regulators to suppress renewable sources.

Providers in several states have phased out net metering in recent years, including Michigan, Hawaii and Connecticut. An Arizona utility spent $130 million in the effort, which was followed by state commissioners voting to end the practice three years ago.

The fight will almost certainly continue for the foreseeable future, however, as advocates view net metering as essential to the growth of solar power. Delman likens net metering to buying tomatoes at the grocery store when you grow them at home, and not getting paid when you sell extras at the farmers market.

Hosch spent $30,000 on his ground-mounted system, and Dallas regulations required him to reinforce it to withstand 90 mph winds. He was able to make it economical by taking advantage of local, federal and private company rebates. He had hoped to set an example for neighbors.

"I didn't get a single question," he said. "Only in the last two years has anybody else put up any solar panels."

U.S. News // 43 minutes ago
SF allows dining, other business to reopen after improving COVID-19 figures
Jan. 28 (UPI) -- San Francisco will allow outdoor dining and some businesses to reopen Thursday -- a major step for a city that has largely been proactive in taking steps to tamp down on the spread of COVID-19.

U.S. News // 5 hours ago
Social media influencer charged with scheme to suppress 2016 U.S. election
Jan. 28 (UPI) -- Federal prosecutors have charged a far-right social media influencer of conspiring with others to spread disinformation online during the 2016 presidential election with the intention to prevent people from voting. 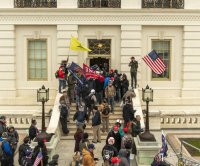 U.S. News // 7 hours ago
Man charged with murder, assault in Portland hit-and-run rampage
Jan. 28 (UPI) -- A district attorney in Oregon has charged a 64-year-old man with murder, accusing him of driving his car into several people, including a grandmother who died in the vehicular attack.

U.S. News // 9 hours ago
Union: 'Unconscionable' that Capitol Police failed to disclose Jan. 6 threat
Jan. 27 (UPI) -- Capitol Police Labor Committee Chair Gus Papathanasiou said Wednesday it was "unconscionable" that leadership was aware of the threat of the Jan. 6 riot at the Capitol and failed to properly inform officers.

U.S. News // 11 hours ago
VA nominee McDonough: Guiding veterans through pandemic will be top priority
Jan. 27 (UPI) -- Denis McDonough, President Joe Biden's nominee to head the Department of Veterans Affairs, said if confirmed he will make "getting our veterans through this pandemic" a top priority.