Feathers from a 2016 powwow.  Photo courtesy of Becket Fund for Religious Liberty

July 15 (UPI) -- After a years-long battle, the federal government is considering expanding protection from criminal prosecution to all "sincere religious believers" who use eagle feathers in observance of their Native American faith.

Currently, only members of the 573 federally recognized tribes -- who number about 1.9 million, according to the Bureau of Indian Affairs -- are covered by a Department of Justice policy that advises against prosecuting them for possessing the feathers for religious use.

The proposed expansion would cover Native Americans who are not enrolled in any tribe and the about 200,000 members of state-recognized tribes, as well as other believers, according to Joe Davis, an attorney with the Becket Fund for Religious Liberty.

The Census Bureau estimated in 2018 that there were nearly 6.9 million American Indians and Alaska Natives in the country, which includes people who are multiracial.

"You're talking about a lot of people who have religious beliefs about eagle feathers but they're shut out," Davis said. "Members of state-recognized tribes are not even allowed to pick up a feather in the wild."

Under the proposed change, members of a state-recognized or federally recognized tribe, a Native American church or other Native American religious organization would be presumed sincere. Others would have the opportunity to demonstrate their sincerity in other ways.

The deadline to comment on the proposal is 11:59 p.m. Eastern Time on Tuesday.

Becket, a nonprofit organization based in Washington, D.C., represents Robert Soto, a feather dancer and religious leader in the Lipan Apache Tribe of Texas. Soto filed a petition a year ago with the Fish and Wildlife Service, a bureau of the U.S. Department of the Interior, seeking the change.

"Native Americans have worshiped with feathers since time immemorial," the petition says. "For many, denying them access to feathers is like denying a Christian the use of a Bible, rosary, or holy water, or forbidding Orthodox Jews from using a Torah scroll in worship."

Soto, who serves as pastor at McAllen Grace Brethren Church in southern Texas and as vice chairman of his tribe, has been a feather dancer for nearly half a century. In 2006, an undercover federal agent raided his powwow, a traditional religious ceremony, and seized 42 sacred feathers.

The agent said he was enforcing the Bald and Golden Eagle Protection Act, which prohibits possession of eagle feathers without a permit. The permits are available for enrolled members of federally recognized tribes who use them for religious purposes; museums; scientific societies and zoos.

Feathers can be obtained from the National Eagle Repository in Colorado, where the government collects and distributes dead eagles and eagle parts. In addition, members of federally recognized tribes can acquire fallen feathers from the wild without a permit.

Soto, who said his feathers were given to him decades earlier, was threatened with prosecution for illegal possession of the feathers. In exchange for signing a voluntary abandonment of his feathers, authorities ended a criminal investigation against the pastor.

Soto decided to pursue the issue in court and said his strong faith in God helped him persevere.

"The feathers are a positive part of our worship," he said. "I decided I had no other choice but to fight."

Soto and other Native Americans filed suit in federal court against the Department of the Interior seeking a declaration that the enforcement of the Bald and Golden Eagle Protection Act violated the First Amendment and the Religious Freedom Restoration Act, which prohibits the government from substantially burdening a person's exercise of religion.

After a district judge ruled the department's implementation of the Eagle Protection Act was narrowly tailored to a compelling governmental interest, the plaintiffs appealed. The 5th U.S. Circuit Court of Appeals overturned the decision and sent the case back to district court.

In 2016, the two sides reached an agreement that recognized the right of Soto and about 400 members of his congregation to use eagle feathers in observance of their faith. As part of the settlement, the government agreed to consider changes in its policies.

Soto's petition, which would promulgate the non-prosecution policy as a formal rule, also proposes more funding for the National Eagle Repository and increased enforcement of laws prohibiting the killing of eagles and other federally protected birds.

Hundreds of comments have been submitted online, some of them in form letters that say the proposed changes would ensure the federal government respects "the unique role that feathers play in Native American faiths."

The proposal has drawn some opposition, including from the Otoe-Missouria Tribe in Oklahoma. Elsie Whitehorn, tribal historic preservation officer, said the tribe has a vital interest in protecting its historic and ancestral cultural resources.

"In this case, a Christian church is stating it needs eagle feathers as a required part of its practice," Whitehorn wrote in a letter submitted online. "There is no Christian theology that requires the use of eagle parts. And non-native participants have no business saying they need eagle feathers to practice a Christian way of worship."

Under the settlement agreement, the government has two years to make a decision on the proposed changes.

U.S. News // 1 hour ago
Dow Jones falls 410 points as COVID-19 stimulus deadline nears
Oct. 19 (UPI) -- The Dow Jones Industrial Average fell 410 points on Monday as a deadline on another round of stimulus imposed by House Speaker Nancy Pelosi drew nearer without progress toward a deal.

U.S. News // 2 hours ago
Federal judge strikes down Trump rule cutting food stamps
Oct. 19 (UPI) -- A federal judge has struck down a Trump administration rule that would have kicked 700,000 people off food stamps.

U.S. News // 3 hours ago
Florida voters wait in long lines on 1st day of early voting
Oct. 19 (UPI) -- Early voting began in the battleground state of Florida on Monday as long lines queued at numerous locations and a glitch shut down one county's website for several hours. 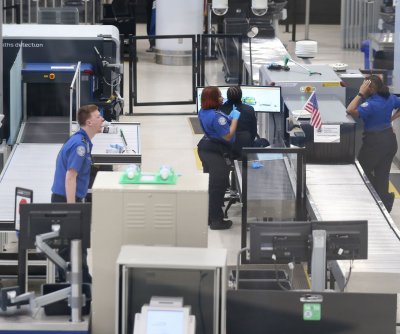 U.S. News // 7 hours ago
Apple sold twice as many iPhone 12s on 1st day of orders, tracker says
Oct. 19 (UPI) -- There were twice as many pre-orders for Apple's new iPhone 12 in the first 24 hours than there were for last year's model, a top analyst said Monday.