'Missing and murdered:' Indigenous women at risk in U.S., Canada 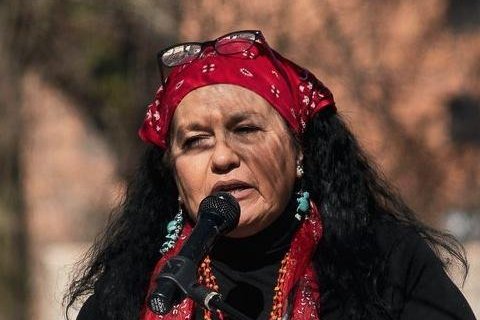 July 3 (UPI) -- A new awareness of the number of missing and murdered indigenous women on reservations and tribal lands in the United States and Canada is raising the alarm about what is being called a multi-generational epidemic.

The number of missing women has been poorly tracked and under-reported because of competing legal jurisdictions, overworked police departments and remote locations, according to new legislation proposed in Congress to better track the problem.

But it's been no secret on social media pages over the past five years.

Even when local police were slow to respond to family members searching for their missing loved ones, these pages have filled the gaps to disseminate information, administrators say.

RELATED For Native Americans, U.S.-Mexico border is an 'imaginary line'

On some reservations, Indian women are murdered at more than 10 times the national average, according to the U.S. Department of Justice. The Centers for Disease Control and Prevention ranks "unintentional injuries," or homicide, as the third-leading cause of death for Native American women under age 24.

"Now that indigenous communities are finding their voice through advocacy, we're raising this issue so that our mothers, daughters and sisters stop disappearing without a trace," she said.

In June, after a three-year national inquiry in Canada, a 1,200-page final report characterized the unsolved deaths and disappearances of hundreds of native women as a form of "genocide."

The "Reclaiming Power and Place" report documented testimony of hundreds of family members who remembered women who disappeared or were killed, especially along the 450-mile "Highway of Tears" in British Columbia.

Activists have symbolized the problem with "red dress" displays in Canada and the United States to represent the lost women. The Canadian government on June 24 approved a $13 million fund for nationwide commemorations of the missing and murdered women.

The problem has long been illuminated on Facebook, where the faces of hundreds of missing native people have stared from pages dedicated to them.

Deborah Maytubee Shipman started the "Murdered and Missing Indigenous Women and Girls USA" page after a 2013 stay on the Navajo reservation, when a 25-year-old female friend disappeared.

As she tried to help the family members get the word out, she said law enforcement agencies were "unhelpful and non-communicative." Amy Hanson's body was found weeks later in a gully in Gallup, N.M.

"Families never got called back by law enforcement," she said. "Those murders were never solved."

Felonies committed on federal reservation land are investigated by the local tribal police, but homicides are under the jurisdiction of the FBI, which took months to respond to Hanson's death, she said.

"I was raised an urban Indian, and I was shocked that families on the Navajo reservation were just so used to murder they had shut down. It broke my heart. Nobody should have to live like that."

Maytubee Shipman, a member of the Chickasaw Nation of Oklahoma, was raised in Oregon and believed it was "just a Southwest problem" until she started her Facebook page and received pleas from the families of hundreds of Native American women and children missing all over the country.

Retired Florida homicide detective Janet Franson returned to the mountains west to Montana with her husband in the 2010s and started to work cold cases for the National Missing Unidentified Persons System.

"Identify your victim" is the first step in solving a homicide, Franson said. "If you don't know who your victim is, you have nowhere to go."

Thousands of bodies go unclaimed in morgues around the United States, but new developments in DNA matching are making it easier to solve some long-cold cases.

Franson was shocked at the high rate of Montana Native Americans who went missing or died.

Franson said she started "Lost and Missing in Indian Country" because so few of the local Native American families had filed official missing persons reports.

In Montana, 26 percent of the people identified as missing are Native Americans, who make up less than 7 percent of the population, according to the state Department of Justice.

In 2018, at least 25 Native American women and children went missing in Montana, and only one was found alive, the department said.

Franson blames overworked police departments in rural areas that deprioritize missing persons reports, especially for adults, who are not covered by national rules governing the timely reporting of missing children.

"Of the cases I have dealt with, half of the native missing persons cases -- men and women -- are homicides without a body. Or are bodies that haven't been identified. A lot of people have been getting away with murder," she said.

She said she has helped solve some cases that were decades old.

"I have found people who had been missing 20 years or more. Sometimes they're still alive and find out somebody cared about them and was looking for them. If they're not alive, at least we can give the family an answer to what happened to them."

Using Freedom of Information records requests, the report identified 506 cases of missing and murdered Native American and Alaska Native women and girls. Of those, 280 were murder cases, 128 were missing cases and 98 were "unknown."

The report estimated more than 5,700 cases of missing native women and girls were reported in the United States, but only 116 were logged in the Department of Justice national database.

New Mexico had the highest number number of missing and murder cases at 78, according to the report. There were 37 cases in Albuquerque and 27 in Gallup.

"Because of the lack of communication between state, local and tribal law enforcement, it's difficult to begin the investigation process," said Curtison Badonie of the Albuquerque-based Coalition to Stop Violence Against Native Women. Response times can take hours and officers are often alone when they arrive, he said.

"If the offender is non-Native, tribal police officers often lack the jurisdiction or resources to arrest or prosecute them," Badonie said.

Missing and murdered in Yakima

According to her Facebook page, Washington state has also experienced high numbers of Native American women who disappear or are killed, said Maytubee Shipman.

"In Vietnam, they had the killing fields. Well, in Washington it's the Yakima reservation," she said.

The Yakima Herald compiled a list of more than 30 women and girls from the Yakima tribe who have gone missing or died under mysterious circumstances.

The Washington State Patrol was tasked last year with an investigation into the state's law enforcement response to missing and murdered Native American women.

In statewide listening sessions, local family members complained that they were turned away by local police departments and told not to report a missing adult for 72 hours. That rule is not an official law enforcement practice, said Capt. Monica Alexander, who spearheaded the investigation.

Police departments also appeared to dismiss reports about missing women who may have been sexually trafficked or who had a history of drug problems, family members said.

"We don't have the trust of the community, I heard that loud and clear. But we want it," Alexander said.

A law signed by Gov. Jay Inslee will establish two tribal liaisons to build relationships with the government and native communities, she said. The state also will develop a law enforcement "best practices protocol" for missing persons reports.

Savanna's Act, introduced in 2018 by U.S. Sen. Heidi Heitkamp, D-N.D., and then again by Sen. Lisa Murkowski, R-Alaska, would make it easier for the almost 600 U.S. tribal jurisdictions to add missing persons to the national database.

Franson said the secret to solving cold cases starts with building a missing persons file 30 days after a case has been reported.

"For law enforcement agents that don't believe it's real police work to work on missing persons cases, I say, a whole lot of those people aren't missing. Those people are dead," she said.

"Start working with the family looking for biometrics to identify someone -- fingerprints, dental records. Go get that stuff before it gets lost forever.

"Maybe we can't do much about those old cases, but we can start from today to make sure we don't lose the information for these cases going forward."

World News // 8 hours ago
WHO chief urges wealthy nations to pause COVID-19 vaccine boosters
Aug. 4 (UPI) -- The head of the WHO on Wednesday called on wealthier countries to stop allowing people who are fully vaccinated to receive booster COVID-19 shots and instead send those doses to poorer nations.

World News // 5 hours ago
Beirut traumatized by port blast, lack of justice a year later
BEIRUT, Lebanon, Aug. 4 (UPI) -- A year after an explosion at the Port of Beirut devastated much of the city, survivors and families of victims remain traumatized -- as much by a lack of accountability as their visceral memories of the violence.

World News // 10 hours ago
At least 8 dead from Taliban car bomb that targeted Afghan defense minister
Aug. 4 (UPI) -- At least eight people have been killed in new fighting in Afghanistan that's been stirred by a resurgent Taliban motivated by the withdrawal of U.S. forces, officials said Wednesday.

World News // 12 hours ago
Fearful of returning home, Belarus Olympic sprinter leaves Tokyo for Austria
Aug. 4 (UPI) -- Belarusian sprinter Krystsina Tsimanouskaya left Tokyo on Wednesday for Poland, by way of Austria, after days of trying to secure asylum out of fear that she'd be in danger if she returns to her home country.
Advertisement