Pompeo: 'Of course' military option on table to deal with Iran 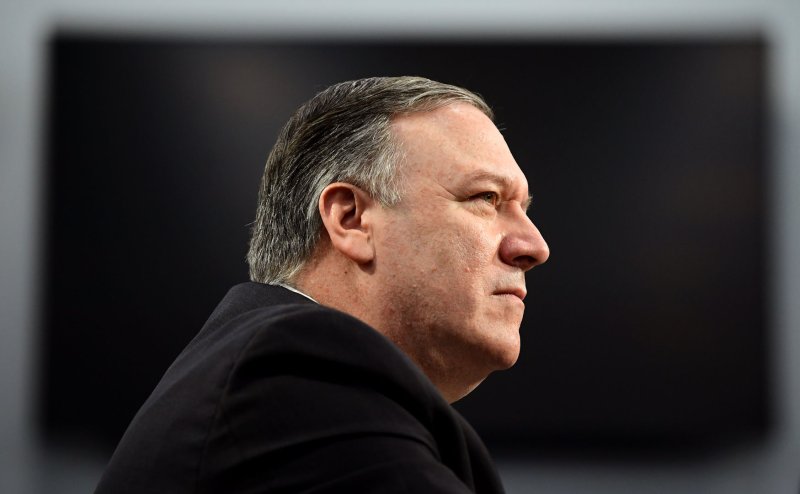 Secretary of State Mike Pompeo said President Donald Trump does not want war with Iran but the United States will defend its interests and the interests of its allies. Photo by Kevin Dietsch/UPI | License Photo

June 17 (UPI) -- Secretary of State Mike Pompeo said Sunday that the United States is considering "a full range of options," including a military response, to combat Iranian aggression.

"The United States is considering a full range of options," Pompeo said on CBS's Face the Nation. "We've briefed the president a couple of times. We'll continue to keep him updated. We are confident that we can take a set of actions that can restore deterrence, which is our mission set."

Asked if military options were on the table, Pompeo responded, "Of course."

"The president will consider everything we need to do to make sure -- right? But what has the president said? We don't want Iran to get a nuclear weapon," he said.

The comments come amid heightened tension in the Middle East where on Thursday two tankers were attacked off the coast of Oman in the Strait of Hormuz, where 20 percent of the world's crude oil passes through. The United States has blamed Iran for the attack, releasing video purporting to show Iran Navy personnel removing an undetonated mine from the hull of one of the ships. Iran has denied the allegations.

Tensions between the two countries began to escalate April 25 when the Trump administration canceled waivers that allowed countries to buy Iranian oil without violating sanctions.

Last month, four commercial vessels were damaged due to sabotage in the Gulf of Oman.

On Sunday, Pompeo said Iran attacked the tankers to hike up the cost of oil so countries would have to buy oil from them in order to lower the costs.

"So, you've seen them attacking international waterways, trying to frankly drive up the price of crude oil around the world so that the world will cry uncle [and buy Iranian oil]," he said.

He said President Donald Trump does not want war with Iran but that they are committed to keeping those waterways open.

"We are prepared to do our part," he said. "We always defend freedom of navigation. We are going to work to build out a set of countries that have deep, vested interest in keeping that strait open to help us do that."

Meanwhile, Iran said Sunday it would be issuing an announcement Monday about further halts to commitments under the 2015 nuclear deal, including plans to stockpile unlimited amounts of enriched uranium, Iran's Tasnim News Agency reported.

U.S. News // 1 hour ago
White House: 26 million applied or are eligible for student debt forgiveness
Jan. 27 (UPI) -- The White House said on Friday that 26 million people have either applied for student loan debt relief or already provided enough information to be eligible.

U.S. News // 4 hours ago
Ohio man charged with immigration fraud over lying about war crimes
Jan. 27 (UPI) -- Federal prosecutors have charged an Ohio man with gaining residency in the United States by lying about war crimes he committed amid civil war in the former Yugoslavia in the 1990s.

U.S. News // 9 hours ago
Biden admin. proposes major changes to race, ethnicity categories on census
Jan. 26 (UPI) -- The Biden administration is proposing major changes to its demographic data collecting practices that will affect how Latinos and those of North African and Middle Eastern descent fill out government surveys.