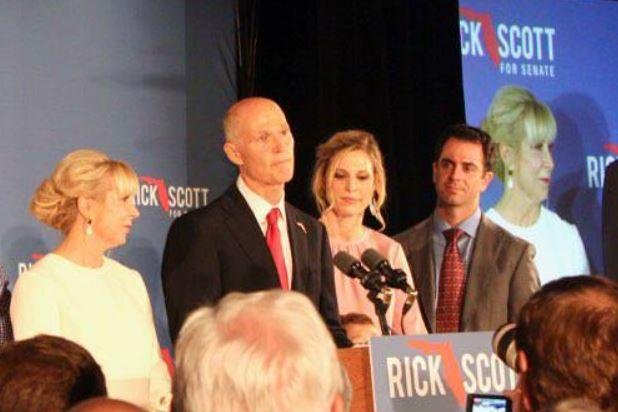 Florida Gov. Rick Scott appears with family members as he speaks to supporters in Fort Myers on Election Night when he declared himself the winner of the U.S. Senate race. But Scott didn't officially beat incumbent Bill Nelson until 12 days later Sunday when a hand recount showed him leading by about 10,000 votes. Photo courtesy Rick Scott for Florida/Facebook

Scott, a Republican governor for eight years, first announced the concession in a post on Facebook. "I just spoke with Senator Bill Nelson, who graciously conceded, and I thanked him for his years of public service."

Nelson announced his concession in a video message on Sunday afternoon, saying the race turned out "a little differently" than he had hoped.

"I by no measure feel defeated. That's because I've had the privilege of serving the people of Florida for most of my life. It has been a rewarding journey as well as a very humbling experience. I don't think anyone could have been as blessed," Nelson said. "I was not victorious in this race, but I still wish to strongly reaffirm the cause for which we fought, a public office is a public trust."

Earlier, Florida's secretary of state released the final results for its midterm elections, including manual recounts for senator and agriculture commissioner.

The manual recount of the senator's race showed Scott leading Nelson by 10,033 votes out of more than 8 million cast, compared with around 12,000 votes after the machine recount.

Results from the recounts are scheduled to be made official by the state's elections canvassing board Tuesday.

Official results were released by Florida's Division of Elections after the noon Sunday deadline to report the manual recounts, which examined overvotes and undervotes -- instances in which a ballot wasn't counted because a voter marked too many or too few candidates.

The recount in Broward County was marred with problems as the elections supervisor misplaced more than 2,000 ballots during its machine recount and the county's canvassing board chose to combine its manual recount totals with its original unofficial totals submitted before recounts began.

Nelson filed a number of mostly unsuccessful lawsuits in hopes of closing the gap with Scott, including one calling for a manual recount in Palm Beach County, which remains open.

"Now the campaign truly is behind us, and that's where we need to leave it," Scott said. "My focus will not be on looking backward, but on doing exactly what I ran on: Making Washington Work. I know change is never popular in Washington and that I'm just one person -- but we have to start somewhere. Over the past eight years, we brought great change to Florida. Now, we have the opportunity to do even more. Let's get to work."

The Senate race is one of four races flipped to Republicans compared with two seats that moved to Democrats. In all there were 35 Senate races in November.

In Mississippi, Republican interim Sen. Cindy Hyde-Smith leads Democrat Mike Espy, the state's agriculture secretary, but didn't receive a majority of the votes. A special election has been set for Nov. 27. If Hyde-Smith prevails, the party will increase majority by two seats to 53-47. Two independents caucus with Democrats.

Scott's gubernatorial job will be filled by Republican Ron DeSantis, who led by about 30,000 votes after the machine recount. Democratic gubernatorial candidate Andrew Gillum conceded on Saturday.

U.S. News // 14 minutes ago
Gallup: Almost 70% in U.S. say COVID-19/viruses are most urgent health issues
Dec. 4 (UPI) -- An overwhelming majority of Americans say COVID-19 and viruses in general are the chief health concerns right now in the United States, according to a Gallup survey Friday.

U.S. News // 3 hours ago
U.N. chief says COVID-19 impact growing; EU proposes pandemics treaty
Dec. 4 (UPI) -- United Nations Secretary-General Antonio Guterres warned the social and economic impact of the pandemic "is enormous and growing" and that a vaccine will not undo the decades of damage the coronavirus has caused.

U.S. News // 5 hours ago
Biden to call for 100 days of masking, taps Dr. Fauci as chief medical adviser
Dec. 4 (UPI) -- President-elect Joe Biden said he will ask Americans on his first day in office to wear a mask for 100 days in order to stymie the spread of the coronavirus.

U.S. News // 7 hours ago
U.S. sanctions Iran-linked group over chemical weapons
Dec. 3 (UPI) -- The Trump administration on Thursday sanctioned an Iranian chemical engineering and research group along with its director over accusations of participating in Tehran's chemical weapons program.