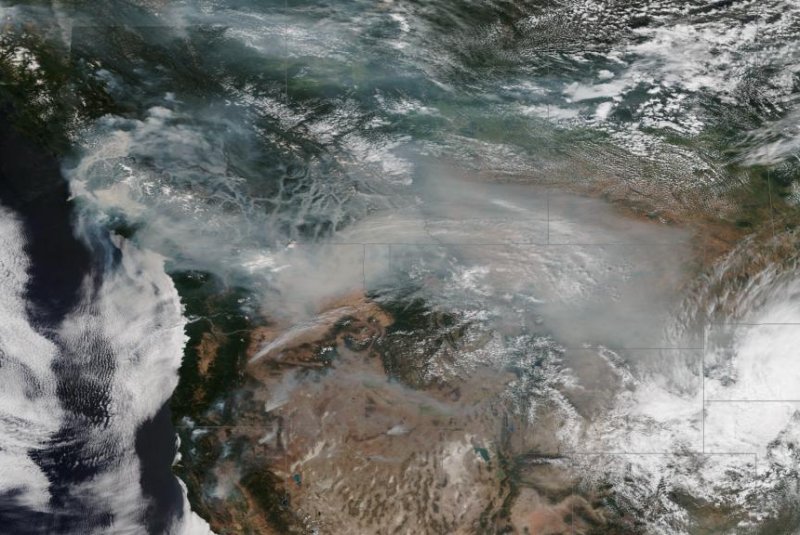 Smoke and haze is seen over the Western United States, where wildfires are creating hazardous conditions that have resulted in air quality advisories and canceled flights. Image courtesy NOAA

Aug. 22 (UPI) -- Wildfires in the Western United States are causing a number of problems that range from health concerns to canceled flights.

Air quality advisories have been posted across the Pacific Northwest, due to fires in the United States and Canada -- many of which are still uncontrolled.

Ash and smoke from the flames have impacted the air quality in many communities, including Seattle, for two weeks. The city's Air Quality Index was at 190 on Wednesday, a rating of "unhealthy." In parts of the city, the index rose as high as 220, which is "very unhealthy."

In Port Angeles, Wash., 80 miles away, the index reached 205 this week. In fact, Seattle's air quality this week has been worse than that of Beijing, which has one of the world's most notoriously polluted atmospheres.

"You've heard a lot about air pollution in Beijing. That's what it's like," Anthony Wexler of the Air Quality Research Center at the University of California Davis {link:told NPR on Tuesday : "https://www.npr.org/2018/08/21/640462703/researchers-study-prolonged-effects-of-wildfire-smoke-exposure" target="_blank"}

An index rating of 151 to 200 is considered unhealthy.

An AQI of 150 has been compared to smoking seven cigarettes a day, and advisories have been announced urging those with heart and lung problems, the elderly and children to stay indoors and avoid exertion.

Advisories for unhealthy air have also been in place at Montana's Glacier National Park, in eastern Washington and along the West Coast. In some places, air quality readings have easily been 10 times worse than the federal standard, or higher.

Redding, Calif., devastated by the Carr fire this month, has seen three straight weeks of unhealthy air. Its high school football team practices indoors, and over 10,000 smoke masks to filter out particulates in the air were distributed.

Other areas of the West are also seeing smoky, hazy skies -- like Colorado, Idaho and Utah.

There is also an economic cost associated with the smoke. Children are vulnerable to illness because their lungs are developing and low-income earners are at risk because they're less likely to have well-sealed homes and air conditioning, Climate Central reported.

The group said EPA researchers have noted between hospital admissions, emergency room visits and premature deaths, wildfire smoke exposure can cost the United States between $11 billion and $20 billion per year.