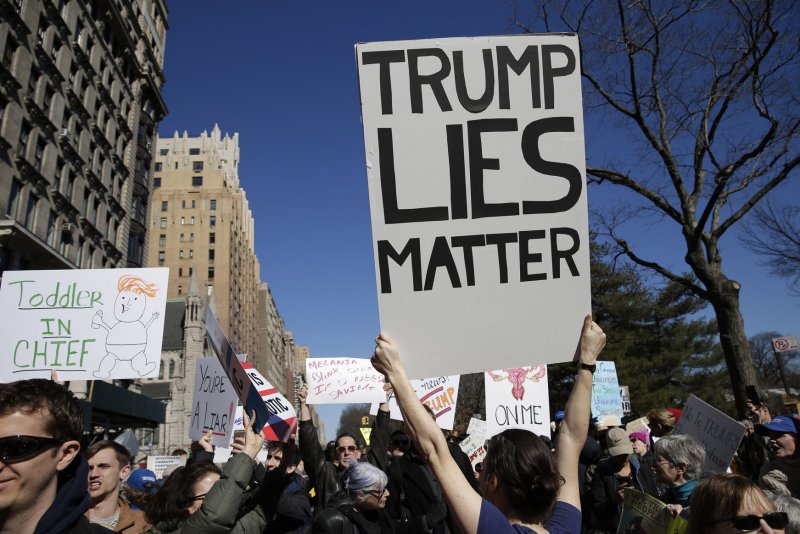 Demonstrators gather for a "Not My President's Day" rally in New York City on February 20. A new hotel is set to open next year in Washington, D.C., which its owners say will cater to political activists who oppose President Donald Trump. File Photo by John Angelillo/UPI | License Photo

Nov. 14 (UPI) -- Visitors to Washington, D.C., who want to protest President Donald Trump as they sleep will have the perfect hotel to stay at next year.

The Eaton Workshop hotel, scheduled to open in the spring, bills itself as a haven for political activists who long for the days when President Barack Obama resided in the White House. The hotel will feature 209 rooms -- and there will also be footage of Obama playing continuously on the hotel's walls.

"We set the stage for residing guests, locals and house members to congregate around creativity and consciousness-building," the hotel says on its website, adding that it "offers provocative content and programming, social and creative incubators, as well as a radical approach to food and beverage, wellness and the arts."

The hotel is spearheaded by Katherine Lo, the daughter of Langham Hospitality Group executive Ka Shui Lo. Langham is one of the largest luxury hotel operators in the world.

Every facet of the hotel will revolve around activism. In addition to the nonstop Obama footage, Lo plans for the hotel to be a meeting place for guests to attend lectures and networking events.

"We plan to have new ideas in the minibar -- an activist toolkit, for example, that includes sheets with information to help you call your congresspeople," Lo said. "And if we'd been open during this year's Women's March, I could have seen us putting poster boards and markers in the rooms!"

The aim of the hotel is to be "inclusive" -- and guests might find the Bible, the Koran and a copy of the United Nations Declaration of Human Rights in their rooms.

Room prices are expected to be similar to other D.C. hotels, which are normally more than $200 per night. It will be located less than a mile from the Trump International Hotel.

U.S. News // 35 minutes ago
FDA halts use of Regeneron, Eli Lilly antibody COVID-19 treatments
Jan. 24 (UPI) -- The Food and Drug Administration on Monday halted use of monoclonal antibody treatments from Regeneron and Eli Lilly, stating they are ineffective against the Omicron COVID-19 variant.

U.S. News // 8 hours ago
3 firefighters killed, another critically injured in Baltimore roof collapse
Jan. 24 (UPI) -- Three Baltimore firefighters were killed and another was trapped Monday when a roof collapsed during a two-alarm fire at a vacant home, fire officials said.

U.S. News // 6 hours ago
House lawmakers call for ban of stock trading by Congress members
Jan. 24 (UPI) -- A new letter signed by 27 members of the House asks that members of Congress be banned from trading or owning stocks.
Advertisement