Portions of downtown Mobile, Ala., were flooded Sunday morning hours after Hurricane Nate made landfall along the Gulf Coast. Photo courtesy the Mobile County Sheriff's Office

The Category 1 hurricane made landfall late Saturday and again early Sunday with 85 mph winds and a 6-foot storm surge. Nate later weakened to a tropical storm.

The storm brought flooding to several parts of Interstate 90 and the Biloxi area by 12:30 a.m. Sunday. Officials recorded storm surges of 6.3 feet in Pascagoula, Miss., and water levels reached 5.4 feet above normal tides at the Mobile, Ala., Coast Guard station.

There were no reports of casualties, though at least 22 people died when Nate pass through the Yucatan Peninsula.

States of emergency were declared in Alabama, Louisiana and Mississippi. President Donald Trump approved emergency declarations in Alabama and Florida.

Dauphin Island, Ala., Mayor Jeff Collier said homes and cars were flooded on the island, which was stranded because of a 6-foot storm surge. Beaches along the Gulf Coast sustained the majority of the damage.

There were no reports of Nate causing injuries or major damage to homes in the city, Biloxi's public affairs manager, Vincent Creel said.

"We were well aware that this could've been a much more serious storm. There was talk of it being a Category 2 with an 11-feet tidal surge when it came ashore. It did not -- happily -- it did not live up to that billing," Creel told CNN. 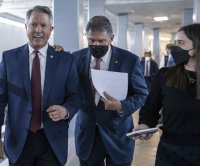 U.S. News // 23 hours ago
Senators clash as debate picks up over stalled voting rights bills
Jan. 18 (UPI) -- Senate Democrats and Republican clashed on the House floor Tuesday, as they argued over the possibility of amending rules surrounding the use of the filibuster, to block debate on two pieces of voting rights legislation.
Advertisement