Members of Congress are returning from their summer recess to address one very important piece of legislation: the budget, which has a deadline of Sept. 30. File Photo by Kevin Dietsch/UPI | License Photo

Congress is returning with its pre-election finish line, and just one immovable hurdle, already in sight just three weeks from now.

After the longest summer break in modern times, lawmakers are required to accomplish a single legislative task before leaving again. But it's a job far more politically fraught than it is procedurally simple: Assuring normal government operations continue through the end of this budgetary year and into the new one.

All the other routine, let alone mildly ambitious, things the 114th Congress still hopes to accomplish? They can wait — and the bulk of them almost certainly will, until the lame-duck session that's scheduled to hobble along for a month or more after the election.

What cannot be delayed is the end of fiscal 2016 on Sept. 30. Unless Congress clears a measure continuing the flow of taxpayers' money to all discretionary federal programs, after midnight that Friday they will lose their legal authority to keep spending on nonemergency operations.

The consequence for the government would be a partial shutdown, with hundreds of thousands of civilian workers furloughed, many agency offices shuttered, national parks emptied, and the flow of some benefit payments disrupted.

The consequence for the Republicans who run the Capitol might not be as clear until after the standoff ends. Historically, the public has put the blame for modern-era shutdowns -- a collection in the 1990s and one 16-day deadlock three years ago -- squarely on the congressional GOP.

So probably the only electoral millstone that could be heavier for the Republicans now -- with their Senate control and their comfortable House majority already so weighed down by Donald Trump at the top of their ticket -- would be a failure to make good on their most minimal power-of-the-purse obligations during September.

But the clear political calculus, very high risk versus minimal reward, is not likely to prevent some factions in the GOP from maneuvering to make assembling the year's first spending deal as troublesome as possible.

Democrats and the Obama administration, for their part, realize they are positioned for significant leverage and have every incentive to take advantage of their opening -- if not to secure some spending wins at the margins, then at least to make Republicans look both truculent and incompetent.

Opinion: You're the Subhuman One, Donald

All the while, Trump will be compelled to either shoulder some of his party's responsibility for the impasse or else castigate his would-be GOP legislative partners yet again.

Speaker Paul D. Ryan, Senate Majority Leader Mitch McConnell and their GOP leadership lieutenants have not offered any hints about their strategies for minimizing the melodrama. It's possible they are waiting until they can look their most combative conservative colleagues in the eye. (The first floor votes on both sides of the Capitol are Tuesday evening.)

The central decisions are how long the year's first continuing resolution should last, and what level of spending it should dictate.

GOP conservatives want to act as soon as possible to postpone the entire budget battle for at least six months, even if that means continued spending at a rate they've complained vehemently about all year, and even though that would risk making a newly Democratic Senate and a new President Hillary Clinton the principal drivers of the debate.

Their desire for a CR into March is based on apprehension about the alternative. A CR expiring at the end of this year would give President Barack Obama and the inclined-to-allocate-more appropriators an opportunity to assemble one final Christmas tree bill. The fiscal hawks argue that those are inevitably festooned with all manner of extraneous spending and policy provisions that get little scrutiny in the rush to go home for the holidays.

Democrats oppose the six-month CR almost unilaterally, because they don't want to allow Republicans to extract themselves so easily from a fiscal tangle they've been in charge of making.

The Appropriations Committee bosses in both parties, predictably, don't want to cede their powers by putting the budget on autopilot for all that long. This is especially true for a pair of the most prominent: Harold Rogers of Kentucky, the House chairman, who loses his gavel at year's end because of GOP term limits, and Barbara A. Mikulski of Maryland, the ranking Democrat on the Senate panel, who's retiring.

Perhaps the most plausible outcome is a combination of the two timetables.

An initial CR would last perhaps a dozen weeks, until the targeted conclusion of the lame duck on Dec. 16. That would give this Congress an opportunity to assemble a bill encapsulating thousands of money and policy decisions made during deliberations this spring and summer on the 12 normal annual spending measures.

And then, assuming a grand bargain on an omnibus appropriations bill did not materialize in time, a second CR would keep the government running beyond the inauguration.

That would put final decisions about the well-underway fiscal 2017 in the hands of the new Congress and the next president, even as they were starting to contemplate their own spending priorities for fiscal 2018 and beyond.

None of the 12 regular bills is likely to get enacted on time, notwithstanding efforts to create the illusion of progress on the House and Senate floors. The impasse is comprehensive mainly because of the GOP civil war over what the grand total should be. A bipartisan deal struck just last year set the number at $1.07 trillion, but GOP conservatives centered in the Freedom Caucus insist that is $30 billion, or 3 percent, more than the outer limit of what they'll support. There's no reason to believe they'll relent now, meaning any CR or omnibus measure at that spending level would only pass if enough Democrats vote "yes" to offset the Republican opposition.

Officially, the House is set to recess for the campaign trail on the final day of the budget year, and the Senate a week later. But it's a decent bet that as soon as a CR is finished, the energy to do anything else will quickly dissipate and members will start rushing to the airports en masse.

Heading out in early October would mark the sixth consecutive time Congress has gone home more than a month before Election Day, relying on its ability to mop up unfinished business afterward. Lame-ducks, in theory, are able to produce some meaningful legislation with the help of dozens of members freed from political pressures by their impending retirements or recent defeats. 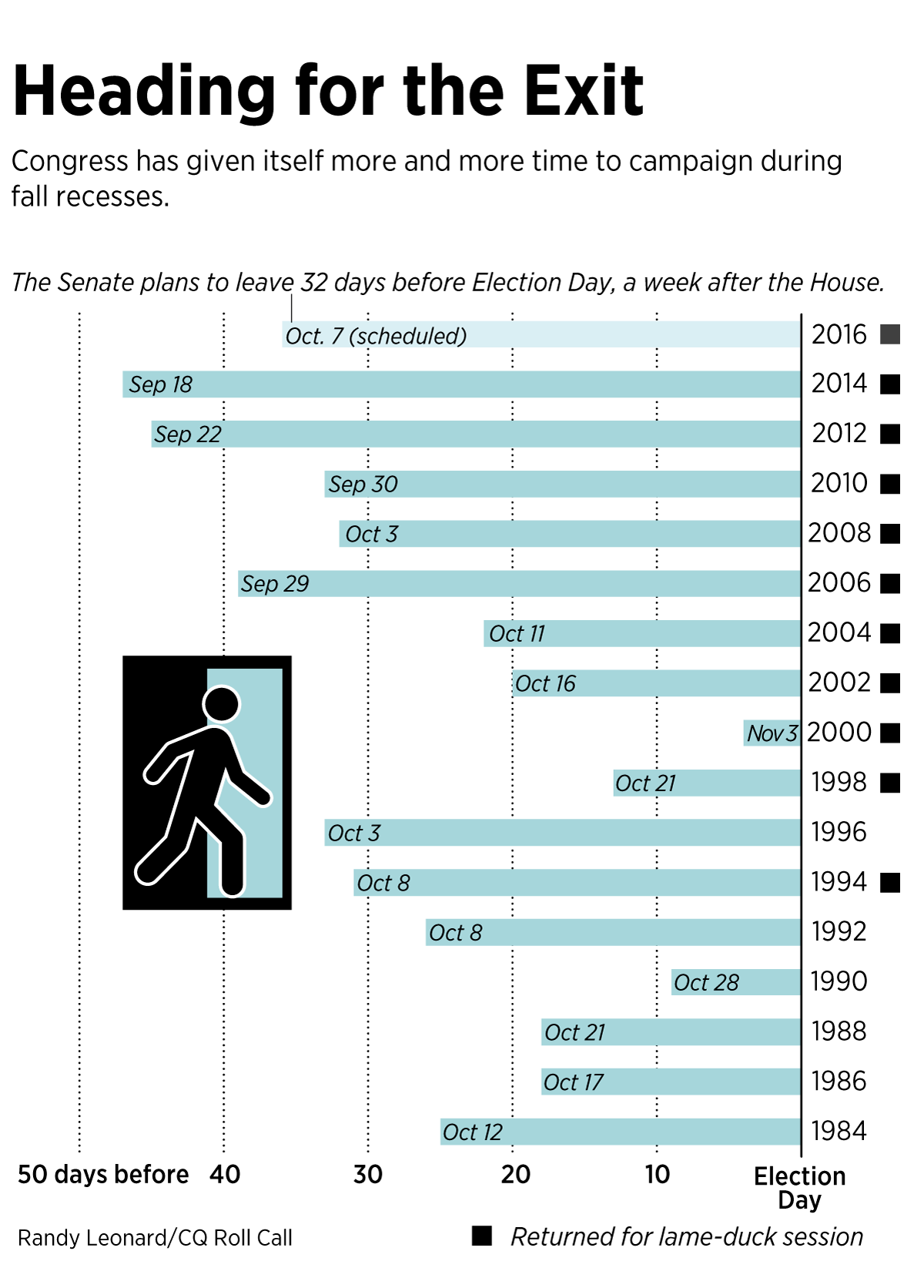 So far, the emerging agenda for the lame-duck seems relatively limited. It's focused on modest measures that have already moved close to completion — some of which stand an outside chance of getting sent to Obama's desk this month.

Any makeshift and temporary budget agreement could well include the freeing up of $1 billion or so for combating the mosquito-borne Zika virus. The funding package has been caught in a partisan fight over policy restrictions, but the domestic threat of the disease has not abated.

Despite Spending Feud, NIH Makes Do in Fight Against Zika

A bill is needed to smooth the extension of more than 30 tax breaks, most of them energy-related, beyond December. The election will determine if such a narrow measure sails through or gets held until 2017, so the next president and Congress have a vehicle for a broader tax overhaul.

Conference negotiations are underway on the first broad rewrite of energy policy in close to a decade, but any deal will get vetoed unless it is missing several contentious Republican provisions.

Legislation to revamp mental health care policies was once on the fast track, but it's been seriously imperiled since both parties decided to use the bill to advance their conflicting positions on gun control.

A bipartisan package to overhaul federal criminal sentencing has foundered for several reasons. Only one of them, lawmaker fears about being seen as soft on crime in an election year, will go away after Nov. 8.

The annual defense authorization bill, finished without fail in each of the past 54 years, must once again navigate a welter of House and Senate difference about military polices and Pentagon spending levels.

For much of the year, the marquee lame-duck event looked to be approval of the Trans-Pacific Partnership, the sweeping trade agreement between the United States and 11 Pacific Rim nations. But, with Clinton now joining Trump in opposition to the accord, Obama would likely suffer a stinging bipartisan rejection if he asks for a vote — even in the more politically safe post-election environment.

That leaves this president with just one more long-shot bid for a victory worthy of the history books. He wants to put Merrick Garland on the Supreme Court. McConnell says the vacancy will be filled only by the next president. But if Clinton wins and gives her own blessing to the federal appeals court judge, there's still an outside shot the Senate confirms him in December.

Advertisement
Get breaking news alerts and more from Roll Call on your iPhone or your Android.