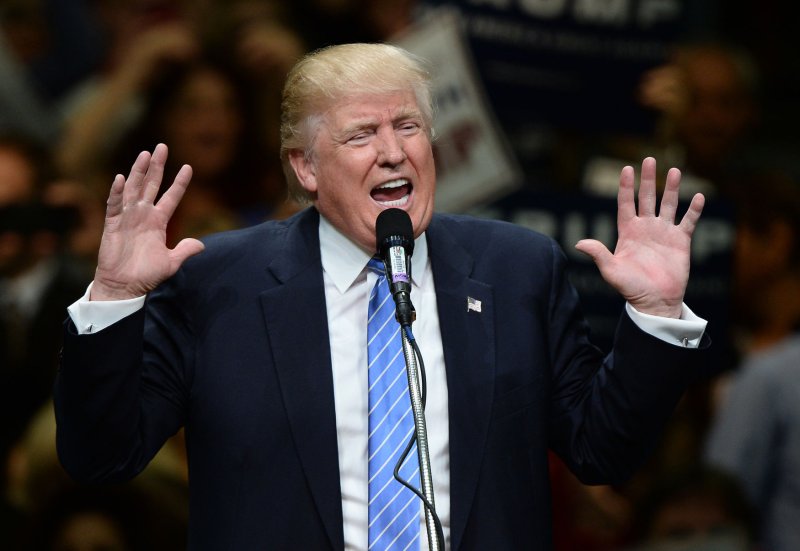 A judge released documents Friday connected to a lawsuit against Trump University about the same time the presumptive Republican presidential nominee was railing against him as an unfair justice and "a hater" at a San Diego rally At least twice, in referring to the judge, Trump has mentioned his Hispanic heritage. File photo by Jim Ruymen/UPI | License Photo

SAN DIEGO, May 29 (UPI) -- A federal judge Donald Trump called "a hater" ordered the release of Trump University internal documents, part of an ongoing lawsuit against the company.

The documents include "playbooks" advising the company's sales team how to market the high-price courses on getting rich through real estate.

The ruling, in which Judge Gonzalo Curiel cited heightened public interest in the presumptive Republican presidential nominee, was issued in response to a request by The Washington Post.. Trump's attorneys argued that the documents contained trade secrets.

The judge's order came on the same day that Trump railed against Curiel at a boisterous San Diego rally for his handling of the case, in which students have alleged they were defrauded and misled. The trial is set to begin in late November, after the presidential election.

RELATED Sanders doubles down on Trump debate, angering some Dems

At least 35 protesters were arrested outside of that rally when what had started out as a peaceful gathering turned rowdy and protesters began throwing things as people exited the rally.

The judge's order didn't reference Trump's 12-minute tirade Friday during which the all-but-sure Republican nominee called Curiel a "hater" and once again invoked his Latino heritage, Politico reported. However, Curiel cited a series of news stories from earlier in the campaign, including a story which noted Trump called Curiel "extremely unfair" and another story that referred to Trump's comments on the judge's ethnicity.

Curiel noted in his order other Trump criticisms.

The judge commented that Trump had emerged as a leading presidential candidate over the course of the civil case against Trump University and that Trump had "placed the integrity of these court proceedings at issue." The judge pointed to a previous case, saying that courts deciding on public disclosure must weigh "whether a party benefiting from the order of confidentiality is a public entity or official; and . . . whether the case involves issues important to the public."

"I have a judge who is a hater of Donald Trump, a hater," Trump said at the Friday rally. "He's a hater. His name is Gonzalo Curiel ... I think Judge Curiel should be ashamed of himself," Trump said at the Friday rally, echoing many of the points he made in speeches a few months ago. "I'm telling you, this court system, judges in this court system, federal court, they ought to look into Judge Curiel. Because what Judge Curiel is doing is a total disgrace, OK?"

It is unclear whether the judge was aware of Trump's Friday tirade, which was taking place about the same time Curiel was ruling on the Washington Post's request for the records.