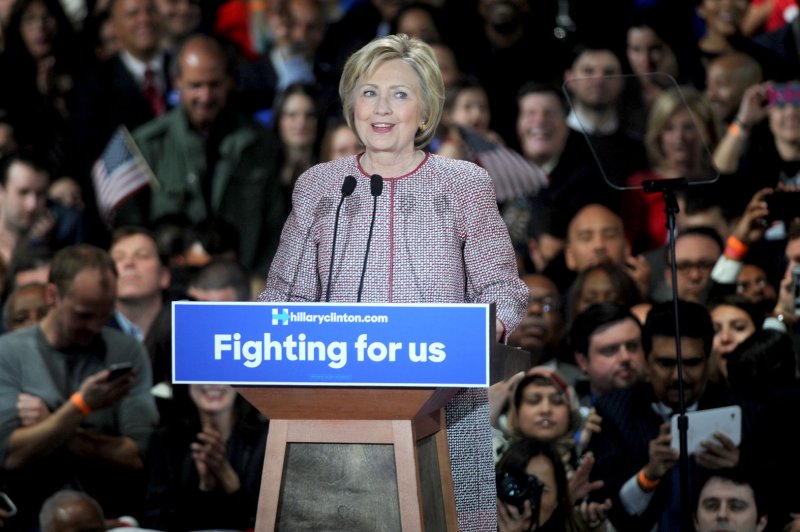 WASHINGTON, May 11 (UPI) -- Democratic presidential front-runner Hillary Clinton is giving hope to a small but committed group of extraterrestrial believers they will finally find out if the truth really is out there.

Clinton has promised to do what presidents for the last 60 years have so far refused: release government documents related to Area 51, the remote section of Edwards Air Force Base in the Nevada desert that many alien enthusiasts believe is the site of alien encounters.

Clinton made the proposal in all seriousness last month during a radio interview and has demonstrated more than a casual understanding of the issue. When she appeared on Jimmy Kimmel Live! recently, the host asked her whether she believes in UFOs. Clinton, a noted policy wonk, quickly corrected Kimmel's improper terminology.

RELATED Joe Biden 'confident' Hillary Clinton will be next president

For the group of ET enthusiasts, the acknowledgment was high tide in their fight for legitimacy in the eyes of government officials, according to The New York Times.

"Hillary has embraced this issue with an absolutely unprecedented level of interest in American politics," said Joseph G. Buchman, who has spent decades calling for government transparency about extraterrestrials.

Clinton's interest in the issue is buttressed by her campaign chairman, John Podesta, a noted alien enthusiast and devoted fan of the 1990s show The X-Files. Podesta has called for the U.S. government to release what it knows about the possibility of alien life and whether there is evidence the planet has been visited by some form of extraterrestrial life.

RELATED The White House won't be handed to Clinton

As for the ultimate question, does Clinton believe in UFOs (or UAPs)?

"I don't know. I want to see what the information shows," Clinton said in the radio interview. But she added, "There's enough stories out there that I don't think everybody is just sitting in their kitchen making them up."

Unfortunately for Clinton and Podesta, both of whom served in President Barack Obama's administration, they have thus far failed to bring their former boss over to the cause.

Like most presidents before him, Obama has generally laughed off questions about the government's role in covering up proof of alien life.

White House Press Secretary Josh Earnest, asked to respond to the Times story on Clinton's Area 51 promise, said he was not "aware of any plans that the president has to make public any information about this."

U.S. News // 11 hours ago
American medic in Ukraine killed while helping evacuate others
Feb. 3 (UPI) -- An American medic who was volunteering on the frontlines in Ukraine was killed when his vehicle was hit by a missile.

U.S. News // 14 hours ago
Treasury sanctions executives of Iranian UAV manufacturer
Feb. 3 (UPI) -- The Treasury Department announced sanctions on Friday against the directors of an Iranian unmanned aerial vehicle manufacturer for providing aerial support to Russia for its invasion against Ukraine.

U.S. News // 15 hours ago
U.S. announces $2.4 billion more defense aid to Ukraine
Feb. 3 (UPI) -- The U.S. Department of Defense said Friday Ukraine will get another $2.4 billion in U.S. military aid to further bolster its defense against the Russian invasion.

U.S. News // 16 hours ago
Honda urges owners of certain cars to get airbags repaired immediately
Feb. 3 (UPI) -- Honda is warning owners of vehicles with unrepaired Takata air bags not to drive them and instead bring them in for repair, saying that the risk to drivers could be deadly.
Advertisement