WASHINGTON, Feb. 24 (UPI) -- On the heels of his Nevada win, Donald Trump got his first two endorsements from sitting members of Congress.

"Donald Trump has clearly demonstrated that he has both the guts and the fortitude to return our nation's jobs stolen by China, take on our enemies like [the Islamic State], Iran, North Korea and Russia, and most importantly, reestablish the opportunity for our children and grandchildren to attain the American Dream," Collins told The Buffalo News in a statement. "That is why I am proud to endorse him as the next President of the United States."

"I think you have more Trump supporters in Congress. They just have to come out of the closet, so to speak," Hunter told Politico. "I've liked Trump since the beginning."

Trump's campaign has not commented on either endorsement. 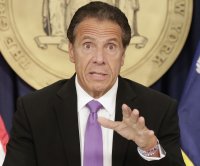 U.S. News // 5 hours ago
Federal agents investigating major California highway crash that killed 13
March 3 (UPI) -- California authorities say 13 people were killed in a major wreck near San Diego on Tuesday and more than a dozen are in the hospital with serious injuries.

U.S. News // 7 hours ago
ADP-Moody's: U.S. added 117,000 private-sector jobs in February
March 3 (UPI) -- Businesses in the United States added almost 120,000 jobs during the month of February, well short of what many economists were expecting, according to a private-sector assessment Wednesday.

U.S. News // 9 hours ago
Texas small business owners worry about lifting COVID-19 restrictions
March 3 (UPI) -- Texas Gov. Greg Abbott's order will leave it to business owners to decide whether to require customers to wear masks inside their establishments. "It's putting us in the firing line," one owner said.

U.S. News // 18 hours ago
Democrats propose creation of monument for Ruth Bader Ginsburg on Capitol Hill
March 2 (UPI) -- Democrats in the House and Senate on Tuesday introduced a bill proposing the construction of a monument honoring the late Supreme Court Justice Ruth Bader Ginsburg at the Capitol.