Anne Frank's photo at the children's memorial at the Jewish cemetery in Warsaw, Poland. File Photo by Ronald Wilfred Jansen/Shutterstock

Eva Schloss, 86, was a friend of Anne's in Amsterdam before their families were found by the Nazis and sent to concentration camps. Anne died along with her mother at Bergen-Belsen, but her diary became a classic work of literature about a Jewish family's life during Hitler's reign.

"If Donald Trump becomes the next president of the U.S. it would be a complete disaster," she said in the essay, marking International Holocaust Remembrance Day. "I think he is acting like another Hitler by inciting racism."

Schloss lives in London and with the theme of this year's remembrance "Don't stand by," she criticized Western governments for their response to Syrian refugee crisis as similar "to what we went through" leading up the Holocaust.

"I remember how upset the world was when the Berlin Wall was erected in 1961," Schloss said. "And now everybody is building walls again to keep people out. It's absurd."

Trump was called "a fascist" by Jeb Bush adviser Max Boot in November and a British newspaper a few weeks later asked readers "Who Said It: Donald Trump or Adolf Hitler?"

"If you go and look at your history and you read your history in the lead-up to the Second World War, this is the kind of rhetoric that allowed Hitler to move forward," she said. "Because you have people who were scared the economy was bad, they want someone to blame." 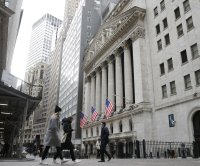