Supremacist with KKK ties ID'd as suspect in Kansas shootings

KANSAS CITY, Kan., April 14 (UPI) -- A 73-year-old man with a long history of anti-Semitism has been identified as the suspect in the killing of three people at Jewish facilities in Kansas City.

Frazier Glenn Miller from Missouri has been identified as a former "grand dragon" of the Carolina Knights of the Klu Klux Klan, and also founder of the White Patriot Party. Police officials have stopped short of calling it a hate crime, and said it was too early to determine the shooter's motives.

“Heil Hitler” is what Miller allegedly yelled as he was arrested by the police. He was also heard shouting neo-Nazi slogans as he was being taken away.

The gunman fired at five people Sunday in the Overland Park area of Kansas City. He shot and killed William Lewis Corporon, a Johnson County doctor, and his 14-year-old grandson, Reat Griffin Underwood, at the Jewish Community Center of Greater Kansas City. He also fatally shot a woman, who is yet to be publicly identified, at the Village Shalom Retirement Center. Two of Miller's targets were uninjured.

The Federal Bureau of Investigation, the Bureau of Alcohol, Tobacco and Firearms, and other agencies had joined the investigation by Sunday evening. President Barack Obama called the shootings "heartbreaking," and said he had instructed his team to ensure that law enforcement had all “the necessary resources to support the ongoing investigation.”

Matt Davis, who lives near Valley Park Elementary and was shopping with his son, said he saw Miller smiling as he was taken away.

“I was wondering, ‘Why is the guy smiling when he’s being arrested,’” said Davis, whose daughter was inside the Jewish Community Center when the shooting occurred.

The Southern Poverty Law Center, an organization that tracks hate crimes and racist activities, said that Miller founded and ran the Carolina Klan before he was sued by the SPLC “for operating an illegal paramilitary organization and using intimidation tactics against African Americans.”

Later, Miller founded the White Patriot Party, which put him in violation of the terms in his settlement. He was found in criminal contempt and served six months in prison.

RELATED 3 dead after shootings at Jewish centers in Kansas 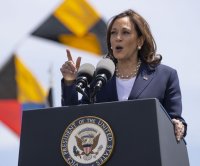