CORONA, Calif., July 7 (UPI) -- A California parole board has denied the release of a former day-care provider who was convicted in 1983 of murdering a toddler and abusing 30 other children.

She was convicted of first-degree murder, mayhem and 33 counts of child abuse stemming from the injuries she inflicted, and was sentenced to 44 years in prison.

About 30 of Nathan's victims and their families traveled to the California Institution for Women in Corona on Tuesday for the hearing.

Many of the victims described their memories of abuse, the Contra Costa Times said.

"But the scars that are under the skin, deeper than hurt -- these are the ones I can't hide from myself. These are the wounds that don't heal: the rage, the terror, the helplessness," Julia Cosmides Harris, who was 3 years old when Nathan beat her nearly to death, wrote the parole board.

Retired prosecutor Douglas Pipes, who handled the case, said Nathan was motivated by a greed for maximum profits by keeping up to 30 children at her home at one time. 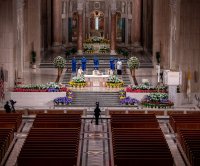