WASHINGTON, Nov. 15 (UPI) -- Massachusetts and Tennessee have applied for waivers from the federal "No Child Left Behind" goals.

Both states submitted plans Monday that would give schools more time to reach easier goals.

The 85-page Massachusetts plan directs schools to cut the number of students failing to achieve proficiency in half by 2017, the Boston Globe reported. The decade-old "No Child Left Behind" law requires all students to be proficient by 2014.

The Tennessee plan says schools must show progress by increasing the number of proficient students by 3 to 5 percent a year, The (Memphis) Commercial Appeal said. The law sets a standard of 20 percent annual increases for Acceptable Yearly Progress.

Critics say the law, one of the centerpieces of President George W. Bush's domestic agenda, sets impossible goals. Because there is no national test, they also say states can set a low bar for progress while those with tough tests are penalized.

The Obama administration has urged Congress to revise the law and is encouraging states to apply for waivers.

U.S. News // 15 minutes ago
Police trying to piece together Texas school shooting as nation mourns 19 children, 2 educators
May 25 (UPI) -- Authorities in south-central Texas will give an update Wednesday on the elementary school attack that killed nearly 20 children and two educators and became the deadliest school shooting in the United States in a decade. 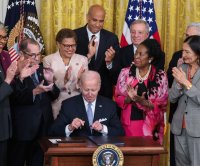 U.S. News // 6 hours ago
Glencore agrees to pay $1.1B to settle bribery, price-fixing charges
May 25 (UPI) -- Glencore International has pleaded guilty to running a multinational bribery scheme and manipulating fuel oil prices in the United States and will pay some $1.1 billion in penalties.

U.S. News // 8 hours ago
U.S. sanctions Hamas official, facilitator network
May 24 (UPI) -- The United States blacklisted a Hamas finance official and an expansive network of facilitators and companies across the Middle East and North Africa that generate funds for the Palestinian militant organization.

U.S. News // 13 hours ago
Biden to lawmakers: 'It's time to act' on gun control after Texas school shooting
May 24 (UPI) -- President Joe Biden called for gun control legislation following the mass shooting at a Texas elementary school that left 19 students and two adults dead on Tuesday.