Appearing with President Barack Obama, who said he brought "the other guy in" on a slow news day, Clinton said the tax compromise would be a "significant net-plus for the country."

"The agreement taken as a whole is, I believe, the best bipartisan agreement we can reach to help the largest number of Americans, and to maximize the chances that the economic recovery will accelerate and create more jobs, and to minimize the chances that it will slip back, which is what has happened in other financial collapses," Clinton said. "This agreement will really help America over the long term, because it continues the credits for manufacturing jobs related to energy coming in to America. … In my opinion, this is a good bill. And I hope that my fellow Democrats will support it. I thank the Republican leaders for agreeing to include things that were important to the President."

Noting his position in the upper income tax bracket, Clinton nonetheless expressed support for prioritizing middle-class tax cuts over those for the wealthiest Americans.

"I think the people that benefit most should pay most. That's always been my position -- not for class warfare reasons; for reasons of fairness in rebuilding the middle class in America. But we have the distribution of authority we have now in the Congress and what we're going to have in January, and I think this is a much, much better agreement than would be reached were we to wait until January. And I think it will have a much more positive impact on the economy," the former president said.

Clinton also offered his support for the renewal of the Strategic Arms Reduction Treaty, supported by most former secretaries of state and former President George H.W. Bush, but opposed by key Republicans.

"The cooperation that we will get from the Russians, and the signal that will be sent to the world on non-proliferation, when all these other things are going on which threaten to increase nuclear proliferation, is very important," he said. "One of the things you know is that when people fool with these weapons, they're expensive to build, expensive to maintain, and expensive to secure the material that goes into making the weapons.

"This is something that is profoundly important. This ought to be way beyond party." 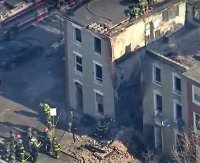 U.S. News // 1 hour ago
3 firefighters hurt, another trapped in Baltimore roof collapse
Jan. 24 (UPI) -- Three Baltimore firefighters were seriously injured and another was trapped Monday when a roof collapsed during a two-alarm fire at a vacant home, fire officials said.

U.S. News // 2 hours ago
Boeing to pour $450 million into program for self-driving air taxi
Jan. 24 (UPI) -- Aviation company Boeing said Monday that it's investing almost a half-billion more dollars into its sky taxi startup Wisk Aero, in a bid to bring the first self-flying air taxi to the market before the decade is out.

U.S. News // 3 hours ago
3 states, D.C. sue Google for 'misleading' users about location tracking data
Jan. 24 (UPI) -- A group of four attorneys general filed lawsuits on Monday against Google, arguing that the tech giant misled users for years about when their location could be tracked by the company.

U.S. News // 3 hours ago
Supreme Court to hear cases that say affirmative action at colleges is discriminatory
Jan. 24 (UPI) -- The U.S. Supreme Court said that it's agreed to hear two cases that challenge the consideration of race in admissions programs at two major American universities -- adding another contentious issue to its current docket.