WikiLeaks not so public about itself 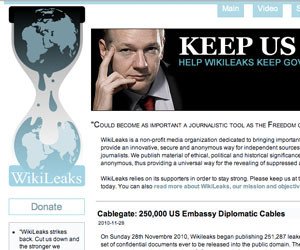 He and his coworkers maintain the purpose of publishing more than 250,000 U.S. State Department documents last week was to enlighten citizens about what their government is doing.

However, there is no reaching WikiLeaks' headquarters in London unless one wants to "leak" on the site. There is no address, phone number or e-mail information for the organization on its site.

The secrecy extends to Assange himself. British authorities told international media this week they're aware the 39-year-old Australian former Internet hacker is hiding in England with an international arrest warrant naming him in a sexual assault investigation in Sweden.

His legal woes could become much larger, as the U.S. government announced in a White House statement Wednesday it had launched a "comprehensive effort to identify and develop the structural reforms needed in light of the WikiLeaks breach."

Additionally, in his native Australia, The Age newspaper reported the government had created a task force to review Assange's activities and determine if they were criminal.

Meanwhile, the ethics and morality of the site's activity have created a political divide, although the diplomatic exchanges posted span both Democrat and Republican administrations.

Left-leaning news publications such as The New York Times, The Guardian newspaper in England and Germany's Der Spiegel magazine all signed agreements with the site to preview the documents before they were posted online.

Reaction from the political right wasn't supportive, as in a blog by Michael Reagan. The eldest son of the late President Ronald Reagan called the publication treason.

"The public does not have the right to know everything -- some information needs to be kept secret if the public's safety is to be assured," he wrote. "Consumers do not need to know the gory details of how sausage is made, nor do the people need to be made aware of all of the details of what is being done to protect them."

Dr. Richard Stoll, a professor of political science at Rice University in Houston and a member of the non-partisan Baker Institute think-tank said in a blog while "the U.S. government classifies too much information," he couldn't fully endorse the WikiLeaks project.

Public derision sparked the site's Internet hosting company to disable the WikiLeaks.org domain name Friday. Saturday, the online finance management company PayPal said it had cut all of its ties to WikiLeaks, saying it had violated its Acceptable Use Policy prohibiting "illegal activity," The New York Times reported.

So far, only one arrest has been made in the leaks. Army Private Bradley Manning, who worked in intelligence in Iraq has been in solitary confinement in a Virginia military prison since his July arrest awaiting trial. The Christian Science Monitor said if he is convicted, he could face more than 50 years in prison.

In yet another odd twist to the story, the government of Ecuador announced Monday it would grant Assange asylum if he asked for it, Ecuadorinmediato reported.

"We are ready to give him residence in Ecuador, with no problems and no conditions," Deputy Foreign Minister Kintto Lucas told the news site.

U.S. News // 6 hours ago
Protesters gather across U.S. in wake of Tyre Nichols beating video
Jan. 28 (UPI) -- Protesters took to the streets in cities across the country on Friday following the release of video of the beating of Tyre Nichols by Memphis police officers on Jan. 7. Nichols died three days later.

U.S. News // 8 hours ago
2 Memphis-area deputies under investigation after release of Nichols footage
Jan. 28 (UPI) -- Two Tennessee sheriff's deputies who were at the scene of the fatal police beating of Tyre Nichols in Memphis are under investigation in connection with the incident, officials said.

U.S. News // 1 day ago
San Francisco court releases Paul Pelosi attack video
Jan. 27 (UPI) -- The police video of the Oct. 28 hammer attack on Paul Pelosi was released Friday by a San Francisco court. It shows the assailant and Pelosi both grasping a hammer held by the attacker, who then suddenly strikes Pelosi.
Advertisement