SAN DIEGO, Nov. 21 (UPI) -- A passenger at the San Diego airport was arrested after he stripped down to his undershorts rather than submit to a frisking by screeners, his lawyer said.

Sam Wolanyk faces charges of refusing to complete the airport screening process and attempting to record the incident on his cellphone.

The San Diego Union-Tribune reported Sunday Wolanyk declined to go through the full-body scanner at San Diego International Airport as he headed for his flight to Barbados Friday. Told he would have to undergo a patdown, Wolanyk undressed, saying it was a way to prove he was not smuggling anything.

"I figured that this way everyone would be happy," Wolanyk told the newspaper in a written statement. "I don't get scanned or groped, they can verify that I'm not a danger to anyone and the line would actually move more quickly because those pat-downs take time."

Wolanyk's lawyer, Jason Davis, said Wolanyk's traveling companion's iPhone was seized. "We are working on getting the recordings as soon as possible for use in Wolanyk's defense." Davis said.

Wolanyk has been a vocal proponent of the right to carry guns in public. The Union-Tribune said he successfully sued the city of San Diego for false arrest after he was busted in the popular Mission Beach area with an unloaded Glock handgun stuck in the waistband of his shorts. 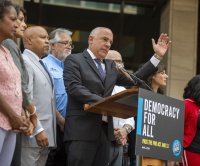 U.S. News // 5 minutes ago
More than 100 state legislators go to D.C. to push Senate on voting rights bill
Aug. 3 (UPI) -- A group of more than 100 legislators from 30 states will take part in a "Week of Action" alongside Texas Democrats who fled to the Capitol last month to call on Congress to pass the For the People Act. 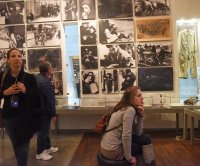 U.S. News // 10 hours ago
MGM Resorts donates land for permanent Las Vegas shooting memorial
Aug. 2 (UPI) -- MGM Resorts is donating land in Las Vegas for the construction of a memorial to the hundreds of people who were killed or injured in the 2017 mass shooting in the city, local officials announced Monday.

U.S. News // 21 hours ago
White House urges landlords to hold off on evictions as moratorium ends
Aug. 2 (UPI) -- The Biden administration scrambled on Monday to stave off an expected nationwide wave of COVID-19 related evictions, urging landlords hold off for 30 days as financial help makes it way to strapped tenants. 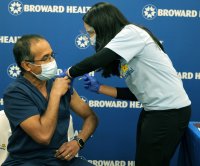 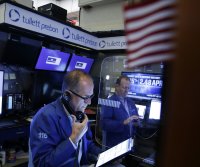