U.S.-led forces invade Iraq ... on this date in history. 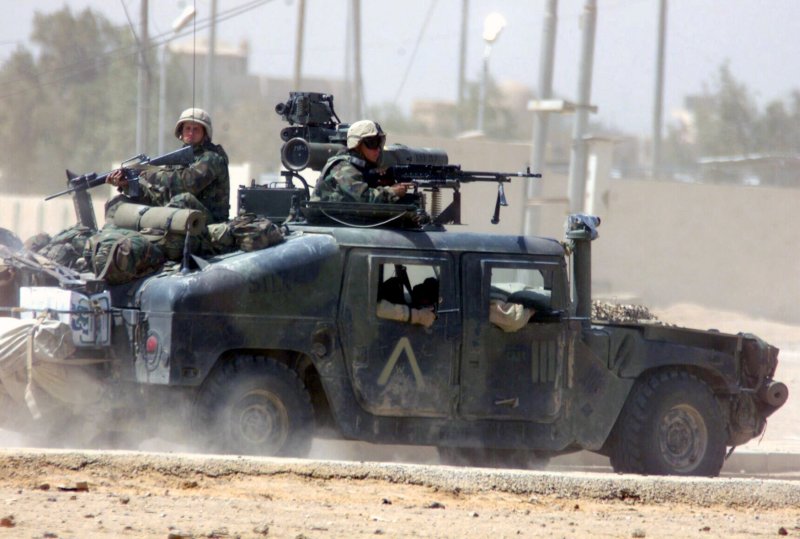 Pilots prepare their CH-53E Super Stallion helicopter aboard the USS Kearsarge for a combat resupply mission in support of U.S. Marines fighting in southern Iraq on March 23, 2003, four days after the start of the Iraq War.. U.S. NavyPhoto/Jeffrey Truett/File/UPI | License Photo

Irish troops are transported at an undisclosed location early in the Iraq War, which began with the invasion of coalition forces March 19, 2003. File Photo/UPI | License Photo

A combat jet of the U.S. Marine Fighter Attack Squadron 115 Silver Eagles flies on a mission over Iraq in this photo released April 1, 2003, two weeks after the start of the Iraq War. File Photo/UPI | License Photo

In 1916, eight Curtiss "Jenny" planes of the First Aero Squadron took off from Columbus, N.M., to aid troops that had invaded Mexico in pursuit of the bandit Pancho Villa. It was the first U.S. air combat mission in history,

In 1942, with World War II under way, all U.S. men between the ages of 45 and 64, about 13 million, were ordered to register with draft boards in what was sometimes called the "old man's draft."

In 1953, legendary filmmaker Cecil B. DeMille won the only Academy Award of his career when "The Greatest Show on Earth," a big-budget extravaganza about circus life, was acclaimed the Best Picture.

In 2011, former U.S. Secretary of State Warren Christopher died of cancer in Los Angeles at the age of 85.

World News // 15 hours ago
16 arrested in probe of Beirut port explosions
Aug. 6 (UPI) -- Officials in Lebanon on Thursday arrested 16 people in connection to their investigation of a series of explosions at a Beirut port that killed at least 137 people.