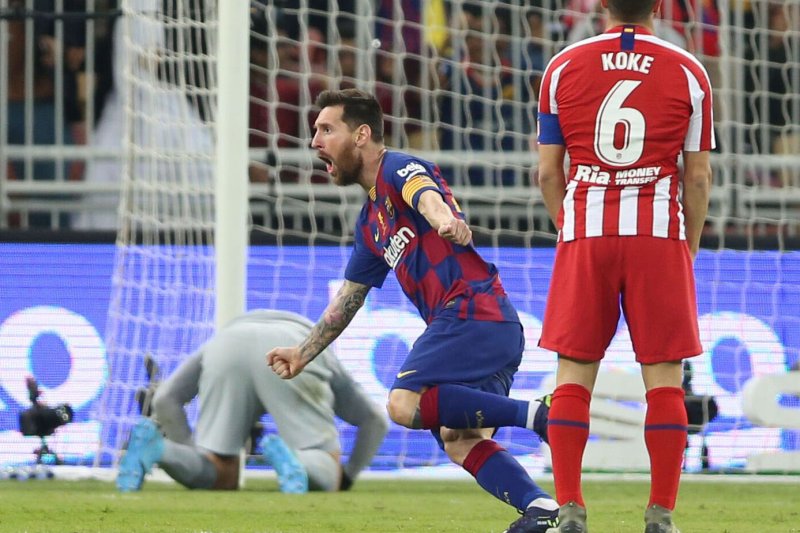 Messi and Antoine Griezmann led Barcelona to a 2-1 lead in the second half before Atletico scored twice in the final 10 minutes of the semifinal Thursday at King Abdullah Sport City Stadium in Jeddah, Saudi Arabia.

Atletico keeper Jan Oblak had a remarkable performance, using a series of diving stops to deny Barcelona's stars on several goal-scoring opportunities. He totalled seven saves in the win.

The La Liga squads played a scoreless first half before Koke broke the deadlock in the 46th minute. Atletico winger Angel Correa dribbled to the top of the box during that exchange, before sending in a short pass to Koke. Koke then placed a shot into the lower left side of the net, beating Barcelona keeper Neto.

Messi scored an equalizer for Barcelona in the 51st minute. Luis Suarez possessed the ball through traffic, while in the Barcelona box, before he touched the ball to Messi. The Barcelona then star ripped a shot into the left side of the net, beating Oblak.

Barcelona appeared to increase their lead to 3-1 in the 59th minute, but Messi had a goal disallowed after a review found he touched the ball with his arm before scoring.

Griezmann gave Barcelona a 2-1 edge in the 62nd minute. Jordi Alba raced down the left flank at the start of that sequence. Alba eventually curled a cross toward the far post. Luis Suarez headed the feed toward the goal, but Oblak made a diving save. The ball then bounced into the middle of the box, where Griezmann headed it into the net.

Barcelona appeared to have scored again in the 74th minute, but that goal was also disallowed after a review. Gerald Pique found the net off of a Messi free kick during that sequence. The goal was taken away after Arturo Vidal was called offsides on the play.

Referees awarded Atletico with a penalty kick in the 80th minute after Neto took down Vitolo in the Barcelona box. Alvaro Morata made the penalty kick, tying the game at 2-2.

Morata also assisted the game-winning goal in the 86th minute. The Barcelona defense lost control of the ball in the middle of the field during that sequence. Morata was able to gain possession, before sending a pass ahead for Angel Correa, creating a breakaway. Correa outran Barcelona's back line before bouncing a shot off Neto and into the net.

"We played a really good game after a long time," Messi told FCBarcelona.com. "We got a really good feeling. Entering the first 80 minutes, we controlled the game. We played with a lot of intensity. We pressed up front and created many chances. Then we made mistakes and we lost the game.