LeSean McCoy to retire as member of Philadelphia Eagles 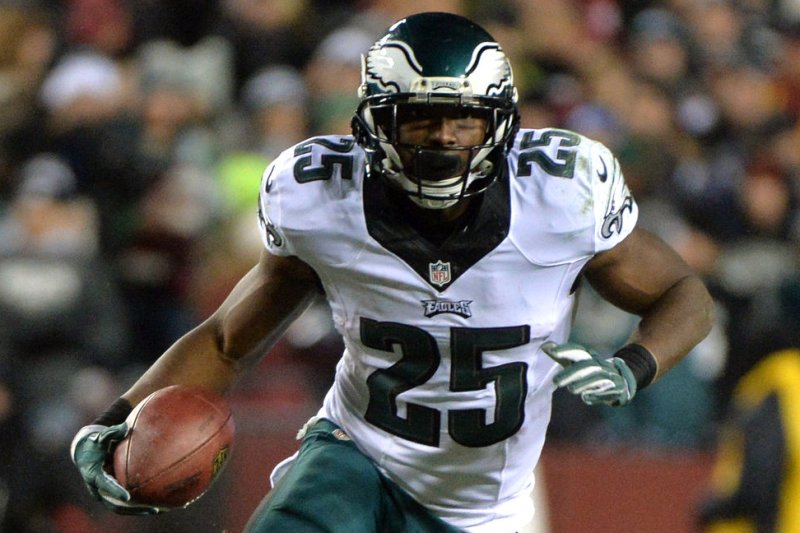 Running back LeSean McCoy, who will retire Friday with the Philadelphia Eagles, spent six of his 12 NFL seasons with the franchise. File Photo by Kevin Dietsch/UPI | License Photo

Sept. 30 (UPI) -- Veteran running back LeSean McCoy will retire as a member of the Philadelphia Eagles on Friday, the team announced.

McCoy, 33, said last year that he wanted to retire with the NFC East franchise. He wrote a letter to fans to announce his retirement, which was posted Thursday on the Eagles website.

McCoy went unsigned this off-season in free agency. He spent the 2020 season with the Tampa Bay Buccaneers.

"After 12 years in the NFL, I've decided to retire an Eagle because this is home to me," McCoy wrote. "I still have that green inside my heart.

"There are times when I'd see the Eagles on TV, and it just felt weird not wearing that uniform."

The 12-year veteran spent six seasons with the Eagles. He went to college at Pittsburgh and joined the Eagles as a second-round pick in the 2009 NFL Draft.

The Harrisburg, Pa., native is the franchise's all-time leading rusher, with 6,792 yards and 44 scores on nearly 1,500 carries.

"I'm retiring because I'm at peace mentally," McCoy wrote. "The only regret I've ever had was not spending my entire career as an Eagle."

McCoy signed with the Buffalo Bills in 2015. He spent his 2019 campaign with the Kansas City Chiefs. McCoy signed a one-year contract last off-season with the Buccaneers. He won Super Bowls in each of his last two seasons.

The Eagles will honor McCoy with a halftime ceremony when they host the Chiefs on Sunday at Lincoln Financial Field in Philadelphia. Chiefs coach Andy Reid coached McCoy from 2009 through 2012 when both were with the Eagles.

"To retire as an Eagle and be an Eagle for life is really important to me," McCoy wrote. "I can't wait to see everyone this Sunday.

"I love Philadelphia because I came from that type of environment. Philly can be tough. You demand a lot from us, but I loved that. I like a challenge. If you're not happy, I always looked at it as, 'Let's respond and find a way to play better.'"

NFL // 2 days ago
Wilson, Broncos earn ugly win over Garoppolo, 49ers
Sept. 26 (UPI) -- Russell Wilson and the Denver Broncos struggled again on offense, but came alive late to earn a narrow victory in one of the lowest-scoring NFL game so far this season, beating the San Francisco 49ers 11-10 in Denver.
Advertisement