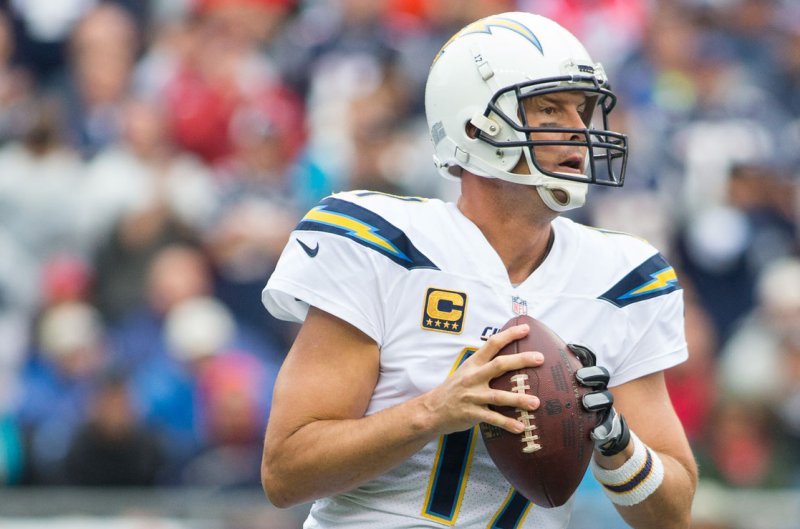 And with an opportunity to catch the Chiefs in the race for AFC West title, Chargers head coach Anthony Lynn played winner-take-all -- his team converting a two-point conversion with 4 seconds remaining to knock off Kansas City 29-28 on Thursday night.

The win helped the Chargers (11-3) clinch a playoff berth and also the lifted Los Angeles into a first-place tie with the Chiefs, who would have clinched the AFC West title with a victory.

The game certainly didn't look like it would go to the Chargers in the first half. Quarterback Patrick Mahomes staked Kansas City to a 14-0 first quarter lead. A mesmerizing throw across his body on the run for a 5-yard strike to wide receiver Demarcus Robinson and an 11-yard dump-off pass to rookie running back Darrel Williams put the Chiefs in charge early.

Mahomes was 24 of 34 passing for 243 yards and two touchdowns, but the Chiefs lacked their usual explosiveness on offense. The team netted a season-low 294 yards of offense.

"They have a good defense," Mahomes said. "When you don't execute and you get penalties, that stalls out drives. We got some scores, but whenever we needed to move the ball at the end we didn't execute."

Chargers quarterback Philip Rivers overcame a pair of interceptions to finish 26 of 38 for 313 yards and two touchdowns.

"After those two interceptions and to come back and play the way he did and lead this team down the field, that was awesome to see," Lynn said. "He has been doing that all year long. It did not surprise us, but that is Phil. He is a clutch player."

The Chiefs currently own the tiebreaker advantage over the Chargers, however, by virtue of their better record within the division. Kansas City can still clinch both the AFC West title and the No. 1 seed in the AFC with victories at Seattle and against Oakland in the season's final two weeks.

Chiefs coach Andy Reid hopes his team learned its lesson with close games after Los Angeles avenged a season-opening 38-28 loss to Kansas City and halted a nine-game losing streak in the series.

"You get in and you don't take anything for granted at home or anywhere else," Reid said. "You have to bear down and that's a good football team. The best thing we can do is learn from it and make ourselves a better football team."

Chargers receiver Mike Williams, a first-round draft pick in 2017, had a season-high seven catches for 76 yards and two receiving touchdowns. He also scored on a 19-yard run and caught the two-point conversion after snagging the tying touchdown pass.

Rivers started the comeback from the early 14-point deficit by connecting with Williams on a 3-yard touchdown pass early in the second quarter.

The Chiefs extended their lead to 21-7 opening the second half. Running back Damien Williams, filling in for injured starter Spencer Ware, scored from 2-yards out. He finished the game with 49 yards rushing and two touchdowns, adding in six catches for a career-high 74 yards. Williams' 123 yards from scrimmage also marked a personal best.

But on the first possession of the second half for the Chargers, momentum began swinging their direction. After he was picked off twice and sacked four times in the first half, Rivers was nearly flawless in the second half.

When Mike Williams scored on a reverse to pull the Chargers within 21-14 late in the third quarter, Rivers felt victory within his grasp.

"In my typical fashion, I hollered, 'This is going to be just like 2013!'" Philips said, referencing a 27-24 overtime win in Week 17 against the Chiefs that boosted the Chargers into their last playoff appearance. "I didn't know it was going to be very, very similar like that but winning like that at the end of the game was just like in 2013."

Damien Williams plunged in from 1-yard out midway through the fourth quarter, giving the Chiefs a 28-14 lead. The Chargers responded, however, with rookie running Justin Jackson scoring from 3 yards out with 3 minutes, 49 seconds remaining.

Los Angeles held the Chiefs to a three-and-out, giving Rivers and his offense the ball with 2:37 left.

Rivers marched the Chargers down field. A pass interference call in the end zone against Chiefs cornerback Kendall Fuller gave the Chargers a first-and-goal at the 1-yard line. Rivers connected with Williams again, setting up the game-winning two-point conversion.