New England announced the move on Wednesday. The Patriots signed Britt on December 13.

Britt, 29, had two catches for 23 yards in three games last season for the Patriots, after being released by the Cleveland Browns. He had 18 receptions for 233 yards and two scores in nine games for the Browns in 2017.

The nine-year veteran had a career-best 1,002 yards and five scores on 68 receptions in 15 games during the 2016 season for the Los Angeles Rams.

Britt entered the NFL as the No. 30 overall pick by the Tennessee Titans in the 2009 NFL Draft. He played his first five NFL seasons for the Titans, before joining the Rams in 2014.

The pass catcher was limited throughout training camp due to a hamstring injury. New England has Chris Hogan and Julian Edelman listed as its starting wide receivers on its unofficial depth chart. Cordarrelle Paterson and Phillip Dorsett are listed as second string options.

The Patriots also have Eric Decker, Paul Turner, Matthew Slater, Devin Lucien, Riley McCarron and Braxton Berrios at the position. Edelman is suspended for the first four games of the 2018 season.

Britt did not suit up for the Patriots this preseason.

NFL // 5 hours ago
Bill Belichick: Tom Brady's move to Buccaneers wasn't about 'not wanting him'
Sept. 27 (UPI) -- Bill Belichick wanted Tom Brady to stay with the New England Patriots instead of leaving for the Tampa Bay Buccaneers two seasons ago, the quarterback's former coach said Monday. 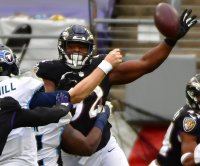