Dallas Cowboys' owner Jerry Jones talks with fans on the sidelines before the Cowboys play the Cardinals at University of Phoenix Stadium in Glendale,Arizona, on September 25, 2017. File photo by Art Foxall/UPI | License Photo

Dallas Cowboys owner Jerry Jones said the suspension of star running back Ezekiel Elliott is not the reason he is threatening to sue the NFL but instead the bigger issue surrounds the ongoing negotiations to extend commissioner Roger Goodell's contract.

Jones, who also is the team's general manager, said he is "disappointed" the Cowboys likely will be without Elliott for the next six games but the possible lawsuit against the league and other owners has nothing to do with how he believes Elliott has been treated in the league's investigation into domestic violence.

Jones emphasized to 105.3 The Fan in Dallas that his threatening a lawsuit only has to do with the handling of Goodell's new contract.

"This is such an important matter in light of a lot of the things that are going on in the NFL right now," Jones said Friday. "I basically feel this extension of Roger should go and be reviewed and approved by all the owners, not just a few of the owners.

"This is simply about making sure that all clubs have input into not only the commissioner's (contract) extension, but also in future years his decisions. We all see how impactful a commissioner's decision can be in many areas. We've given him a lot of power and I think we need the checks and balances of ownership having to actually be in a position to not just suggest but approve of his decisions. That's what this is about."

It was reported Thursday that Jones alleged in a letter sent to fellow NFL owners by his attorney that they are being misled about details surrounding the negotiations to extend Goodell's contract.

Cowboys general counsel Jason Cohen sent the letter to the lawyer representing the owners on the league's compensation committee on Wednesday, maintaining that Jones found "a number of very concerning issues" while he was a member of the committee discussing Goodell's extension.

"The committee that basically negotiates the salary with our commissioner is taking the view, especially the chairman (Atlanta Falcons owner Arthur Blank), that they in a limited group can complete this agreement," Jones said on 105.3 The Fan. "I disagree. I think we should, with all of the interest and commitment that you have throughout the ownership."

Jones said the issues go beyond the decision to suspend Elliott, who had his latest legal motion denied by the 2nd U.S. Circuit Court of Appeals in New York on Thursday, meaning his six-game NFL suspension is back in effect.

Goodell suspended Elliott for six games on Aug. 11 after a 13-month investigation concluded he was in violation of the league's personal-conduct policy for an incident in the summer of 2016. Elliott, who was not arrested or charged in the case, maintains his innocence after being accused of assaulting former girlfriend Tiffany Thompson in Columbus, Ohio.

"The facts are, the issues that involve the commissioner are far more reaching," Jones told the Cowboys' flagship network. "I've been dealing with this commissioner for almost 28 years, as an employee of the NFL. Zeke's been involved here a year, a year and a half. Those are really separate issues as to Zeke. The policy that we have that has impacted Zeke is more of my issue with the commissioner, moreso than Zeke's particular circumstance."

Barring a last-minute maneuver, Elliott will begin his suspension when the Cowboys visit the Atlanta Falcons on Sunday. His next court date is set for Dec. 1, after the NFL Players Association requested an expedited appeal of Thursday's decision.

If the six-game suspension sticks, Elliott will next be eligible to play against the Seattle Seahawks on Dec. 24.

"I'm disappointed when he's not going to play," Jones said Friday. "It's what it is. That's not being resolute. It's just simply, it's what it is. I really fervently disagree that we shouldn't have him on the playing field." 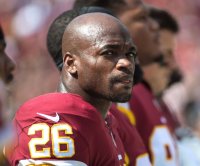