There will be plenty on the line when the San Antonio Spurs and Houston Rockets square off Sunday afternoon at the AT&T Center in San Antonio in the latest edition of their Texas rivalry.

The Spurs (44-32) are in fourth place in the Western Conference, a half-game ahead of Minnesota and Oklahoma City and a game up on Utah and New Orleans with six games left.

The Los Angeles Clippers and Denver are another two games back but currently out of the playoffs as the ninth- and 10th-place teams. Only eight will make the postseason.

The Rockets (62-14), who have won 11 consecutive games, already clinched the Western Conference title and secured the NBA's top record and home-court advantage throughout the playoffs when Toronto lost at Boston on Saturday night.

RELATED James, Cavs aim to keep guard up vs. Mavericks

Houston has taken the first three games of the season series from San Antonio (by an average of 14 points) and there would definitely be a sense of accomplishment in sweeping its longtime rival.

The Rockets head to the Alamo City after a scintillating 104-103 home victory over Phoenix on Friday in which Gerald Green hit a 3-pointer with 0.3 left to give Houston the victory.

James Harden had 28 points, 10 assists and eight rebounds in helping piece together the Rockets' second-largest comeback of the season.

"I feel like I really didn't get a rhythm, we didn't have a rhythm and they were playing much harder than us," Harden said after the win over Phoenix. "So we just had to pick our intensity up defensively, and then we finally got some shots to fall."

It was Houston's 32nd win in its past 34 outings. The Rockets are the first team since the 2010-11 Spurs to have three double-digit winning streaks in the same season, forging streaks of 17 and 14 consecutive games before the latest run.

Sunday's game is infinitely more important for the Spurs. San Antonio has little room for error and -- after the game against Houston -- just two home games remaining.

San Antonio's last outing was a 103-99 win at home over Oklahoma City on Thursday. LaMarcus Aldridge, who was questionable because of the left knee contusion suffered two night earlier in Washington, gutted it out and produced 25 points and 11 rebounds to lead the Spurs.

"We held OKC to 18 points in the fourth quarter," Spurs coach Gregg Popovich said after Thursday's victory. "As I've said all along, the defense is what we have to be good at because we're going to have nights where our scoring isn't great. But out guys' perseverance tonight was pretty impressive."

Four of San Antonio's last six games are against teams with winning records, so every win is huge. 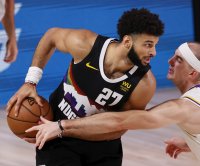