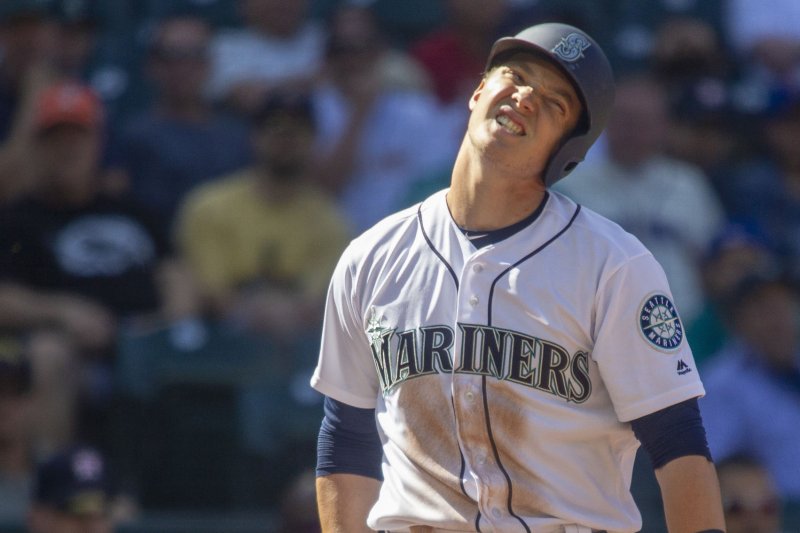 Seattle Mariners batter Andrew Romine (7) grimances as he strikes out in the 9th inning against the Houston Astros on August 1 at Safeco Field in Seattle. Photo by Jim Bryant/UPI | License Photo

OAKLAND, Calif. -- The two teams currently battling for the second American League wild-card playoff spot go head-to-head in a three-game series that begins Monday night with a matchup of the teams' top winners.

Seattle is coming off a four-game sweep of the AL West-leading Houston Astros (73-46), which brought the second-place A's and third-place Mariners closer to the top.

Mariners manager Scott Servais credited a wakeup call the club received when losing two of three to the last-place Texas Rangers as the key to the turnaround in Houston.

The Mariners have done just about everything right against the A's so far this season, winning three series by 2-1 counts. The clubs will play 10 more times, starting Monday, in the final seven weeks of the regular season.

Gonzales pitched two of the earlier six wins over the A's, including seven shutout innings in a 1-0 victory in Oakland in May.

He's 1-0 with a 2.51 ERA in three games, including two starts, against Oakland in his career.

Gonzales lost his last start at Texas and he enters the game having allowed 19 hits and 11 runs in 12 innings over his last two starts. He's 0-2 in August after going 4-0 in July.

Manaea also is coming off a poor effort, lasting a season-low 2 2/3 innings in a 4-1 loss to the Los Angeles Dodgers last week. He was pulled after allowing five hits and three walks, resulting in three runs.

Manaea is 4-4 with a 4.12 ERA in nine career starts against Seattle.

The A's are returning home after a three-game jaunt to Los Angeles, where they outlasted the Angels 8-7 on Sunday to win two of three.

"It will be a good test," A's third baseman Matt Chapman said of a stretch that includes three games later this week against the Astros. "When we come out of the other side (of playing 20 games in 20 days, beginning Friday against Houston), we'll see what we're really made of."

Like Gonzales, Manaea also has one impressive outing against Monday's opponent. He held the Mariners to two hits and one run in seven innings of a 2-1 win in April at Seattle.

The A's will get an opportunity to show off their new and improved bullpen to the Mariners, with Jeurys Familia, Fernando Rodney and Shawn Kelley having been added to closer Blake Treinen's supporting cast.

MLB // 23 hours ago
Athletics' Stephen Vogt homers in final career at-bat
Oct. 6 (UPI) -- Oakland Athletics veteran Stephen Vogt, who announced he will retire from baseball, ended his career in style, getting introduced by his children for his first at-bat before homering in his final plate appearance.

MLB // 1 day ago
Man who caught Judge's home run ball, worth up to $2M, unsure about what to do
Oct. 5 (UPI) -- Corey Youmans, who caught Aaron Judge's record-breaking 62nd home run at the latest New York Yankees game in Arlington, Texas, told reporters he hasn't decided what to do with the valuable keepsake.

MLB // 1 week ago
MLB mulls potential time changes for Mets-Braves series due to hurricane
Sept. 28 (UPI) -- MLB representatives are holding talks with the Atlanta Braves and New York Mets about potential changes to their scheduled series this weekend in Atlanta because of Hurricane Ian' path, the league confirmed Wednesday.

MLB // 1 week ago
Marlins pitcher becomes first in 100-plus years to balk three times in same at-bat
Sept. 28 (UPI) -- Veteran pitcher Richard Bleier made history -- in an unfortunate manner -- in a Miami Marlins win over the New York Mets, becoming the only MLB player in more than 100 years to be called for three balks during one at-bat
Advertisement