By Bob Keisser, The Sports Xchange 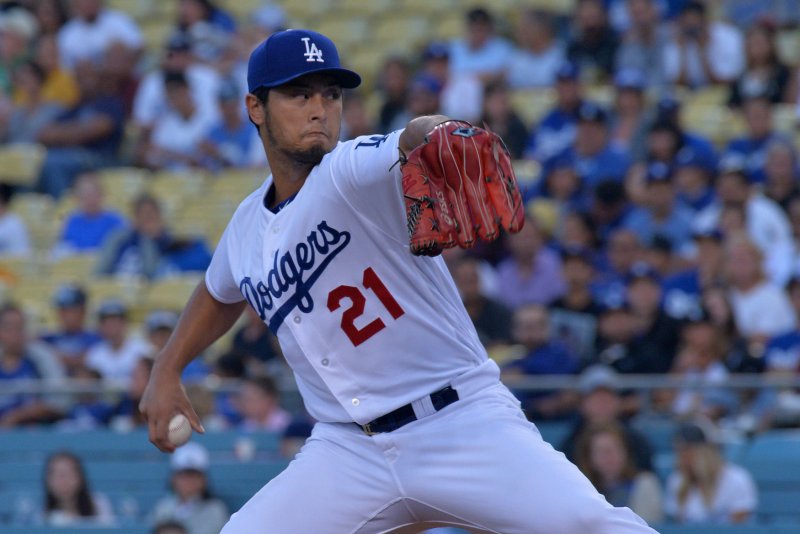 LOS ANGELES -- The Los Angeles Dodgers didn't celebrate their 100th win of the season Monday night as much as they lauded the performances of Yu Darvish and Logan Forsythe.

The Dodgers beat the San Diego Padres 9-3 behind an overwhelming performance by Darvish, the right-hander they obtained at the trade deadline from the Texas Rangers to strengthen their rotation. He threw seven sharp innings, allowing just two hits, one a bloop single, and one run while striking out nine.

Forsythe, acquired from the Tampa Bay Rays in the offseason to fill second base, was 3-for-3 with a walk, a three-run double, solo home run. The four RBIs tied his career high. He crushed a bases-loaded double in the first inning to the left field gap, then went deeper to left field for his sixth home run in the third.

Darvish was spotty in several of his first few Los Angeles starts, but he had the Padres flailing Monday.

"He had real life on his pitches," Dodgers manager Dave Roberts said. "He was in complete control, and there was a lot of weak contact."

"He has so much to work with," Los Angeles catcher Yasmani Grandal said. "As a hitter, you almost have to pick one pitch and hope you guessed right. The difference tonight was that he threw strikes. He has great stuff, he just has to get it in the strike zone."

Darvish (10-12 overall, 4-3 with the Dodgers) retired the first 13 Padres before hitting Cory Spangenberg and allowing a run-scoring double to center by Hunter Renfroe.

In a generally stellar season for the Dodgers, Forsythe was the biggest aberration, starting the year slowly after a toe injury and never really finding a groove.

"Logan is being more aggressive," Roberts said. "He's taking advantage of hitter's counts. I think he was just a little passive early."

Forsythe said, "I think I got away from (being aggressive) early, and it contributed to me trying to find my swing. Mechanically and mentally, I feel like I'm in a better place."

Forsythe's bases-loaded double off starter Travis Wood (4-7) gave Darvish a quick 3-0 lead, and his home run made it 5-0 after three. Austin Barnes hit a three-run home run in the fifth, his eighth of the season, for an 8-1 lead.

The Dodgers, with five games left to play, lead the Washington Nationals (95-61) by 4 1/2 games in the race to secure home-field advantage throughout the NL playoffs. They have a 1 1/2-game lead on the Cleveland Indians (98-58) to secure home field should both teams advance to the World Series.

It is also their 55th win at home, equaling the L.A. franchise record for home wins previously reached in 1980 and 2015.

The Padres have struggled on the road (27-50), but they have impressed in several ways the second half of the season. The Dodgers series is their eighth consecutive against a team with a winning record, and they split or won four of the previous seven.

"It's playoff teams every single time we play," San Diego manager Andy Green said, "and against the kind of guys playing for elite teams and competing for or winning championships. I think we have a lot of guys who can reach that level. You've seen a lot of good signs in our young guys."

Wood gave up six runs on five hits and four walks in 4 2/3 innings.

NOTES: RF Yasiel Puig was benched Monday by manager Dave Roberts after reporting late for a mandatory pregame session. It was the second straight game in which Puig was benched. He sat out the Sunday game against the Giants after trying to steal second on his own in the ninth inning of Saturday's 2-1 loss, then failing to slide as he made the game's final out. Roberts said Puig would start Tuesday. ... Dodgers 3B Justin Turner is expected to return to the lineup this week after missing the past four games with flu-like systems and a jammed thumb on his right hand. Turner hit balls off a tee Sunday and took batting practice against live pitching in the indoor batting cage before the Monday game. ... Padres RF Hunter Renfroe extended his hitting streak to seven games with a RBI double.