By
Paul Harris, The Sports Xchange

DETROIT -- Recently it has been goaltender Petr Mrazek grabbing the spotlight in games involving the Detroit Red Wings, but not Friday night.

Goalie Semyon Varlamov made 43 saves and center Nathan MacKinnon and left winger Blake Comeau scored in a four-round shootout to give the Colorado Avalanche a 3-2 win over Detroit on Friday night at Joe Louis Arena.

"He was phenomenal for us," Colorado coach Patrick Roy said of Varlamov. "We had back-to-back games and got in late last night. Not trying to find an excuse but they're a good puck possession team. Our goalie needed to be our best player for us to win and he was."

Colorado won 4-3 at the Ottawa Senators on Thursday. Varlamov made 29 saves in that game.

"He (Roy) came to me and said 'I'm going to play you tomorrow night'," Varlamov said about finding out he was playing two nights in a row. "And I said, 'I'm ready.'"

Mrazek, who leads the NHL with a 1.94 goals-against average and .933 save percentage, made 19 saves.

Center Matt Duchene and Comeau scored for Colorado in regulation.

"They dominated us," Roy said. "They played a good game. You could tell they were a confident team."

Detroit outshot Colorado 45-21 and attempted 87 shots to 35 for the Avalanche.

"I thought we played really good. I thought we did tons of really good things," Red Wings coach Jeff Blashill said. "We always talk about process, I thought from a process standpoint we were, in a lot of ways excellent, to be honest with you. I thought our energy level was great, I thought we won tons of puck races and puck battles in the O zone, I thought we shot the puck well, we had net presence. The puck just didn't go in as much we would have liked it to."

Datsyuk scored in the shootout and winger Justin Abdelkader had two assists.

Varlamov made a spectacular save on right winger Gustav Nyquist's backhand shot as he cut in off left wing and in front of the crease three minutes into overtime.

"Varlamov made some good saves when he had to there," Abdelkader said.

Datsyuk tied the score 2-2 with a power-play goal 9:50 into the third period. He put in a backhand shot from just outside the crease in front for his ninth goal of the season. Red Wings defenseman Mike Green knocked the puck out of the air with his stick just inside the blue line on a clearing attempt by Colorado.

Comeau gave the Avalanche a 2-1 lead 5:30 into the second period when his shot from the high slot got through Mrazek for his ninth goal of the season.

Ericsson tied it 4:09 into the second period at 1 with a screened wrist shot from the point that skipped past Varlamov for his second goal of the season.

Duchene opened the scoring 9:27 into the first period. He tipped in a pass from center Mikhail Grigorenko, who was behind the net, from the bottom inside edge of the right circle. It was Duchene's 25th goal of the season.

Varlamov made a pad save on Datsyuk, who was about five feet from the crease in front of the net, with about 10 seconds left in the first period.

Sports News // 8 hours ago
Viktor Hovland withdraws from U.S. Open after sand causes eye injury
June 18 (UPI) -- Norway's Viktor Hovland was forced to pull out of the U.S. Open golf tournament Friday after sand got in his eye and caused severe irritation. 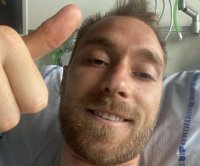 MLB // 20 hours ago
Yankees make history with triple play vs. Blue Jays
June 18 (UPI) -- The New York Yankees completed their second triple play of the season in a win over the Toronto Blue Jays. The triple play was the first in MLB history completed in the order of position numbers 1-3-6-2-5-6.

MLB // 20 hours ago
Indians smack four homers in win over Orioles
June 18 (UPI) -- The Cleveland Indians pounced all over the Baltimore Orioles pitching staff in their latest victory, with four players homering to cap off a four-game sweep in Cleveland.
Advertisement