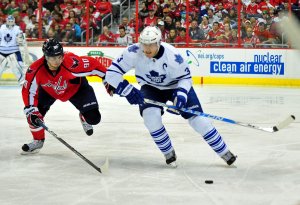 NHL // 4 years ago
Pittsburgh Penguins pulverize Ottawa Senators to take 3-2 series lead
PITTSBURGH -- Offense seemingly came by the eyedropper for the Pittsburgh Penguins during the first four games of the Eastern Conference final.

NHL // 4 years ago
Pittsburgh Penguins even series with 3-2 win over Ottawa Senators
Olli Maatta and Brian Dumoulin scored their first goals of the playoffs as the Penguins built a lead and then hung on to defeat the Ottawa Senators 3-2.

Dion Phaneuf (born April 10, 1985) is a Canadian professional ice hockey defenceman and captain of the Toronto Maple Leafs of the National Hockey League. He was drafted ninth overall in the 2003 NHL Entry Draft by the Calgary Flames, and made his NHL debut in 2005 after a four year junior career with the Red Deer Rebels of the Western Hockey League in which he was twice named the Defenceman of the Year. He set a Flames record for most goals by a first-year defenceman and was named a finalist for the Calder Memorial Trophy as top rookie in 2005–06. Two years later, he was a finalist for the James Norris Memorial Trophy as top defenceman, though he did not win either award. Phaneuf is a two-time NHL All-Star. He has represented Canada internationally three times in his career, winning silver and gold medals at the World Junior Hockey Championship in 2004 and 2005 respectively, and a gold medal at the 2007 Men's World Ice Hockey Championships.

Phaneuf is renowned by his opponents for his physical play as he has been rated one of the NHL's top hitters by his peers while also being accused of trying to injure his opponents at times. His much publicized relationship with actress Elisha Cuthbert also attracted controversy following disparaging remarks by the New York Rangers forward Sean Avery. Phaneuf is active in the community; the Flames honoured Phaneuf for his role as an ambassador to the Alberta Children's Hospital where he participated in events that help sick and injured children during his time in Calgary.

Dion Phaneuf was born April 10, 1985 in Edmonton, Alberta. He is the son of Paul, in construction, and Amber, a nurse. He has a younger brother, Dane, who is a prospect of the Prince George Cougars of the Western Hockey League (WHL). Phaneuf's parents describe their family as being close-knit, as Phaneuf kept in close touch with his family as he embarked on his own junior career.

FULL ARTICLE AT WIKIPEDIA.ORG
This article is licensed under the GNU Free Documentation License.
It uses material from the Wikipedia article "Dion Phaneuf."